I played a course a couple of days ago which I’d played dozens of times, many years ago. It isn’t on my current rota of regular stops. It was fun to get back there and play for a good change of pace. Somehow I managed to birdie the first three holes. Of course after that the golf gods clamped down on my joy and let me have it. Taught me a lesson. It didn’t hurt that much because that’s exactly what I knew they were going to do. So I outsmarted them.

On the first hole I had about an 80 yard approach shot to a back pin. I hit it 85. The ball landed behind the green and bounced backwards to about 6 feet. That was odd, but I wasn’t complaining. 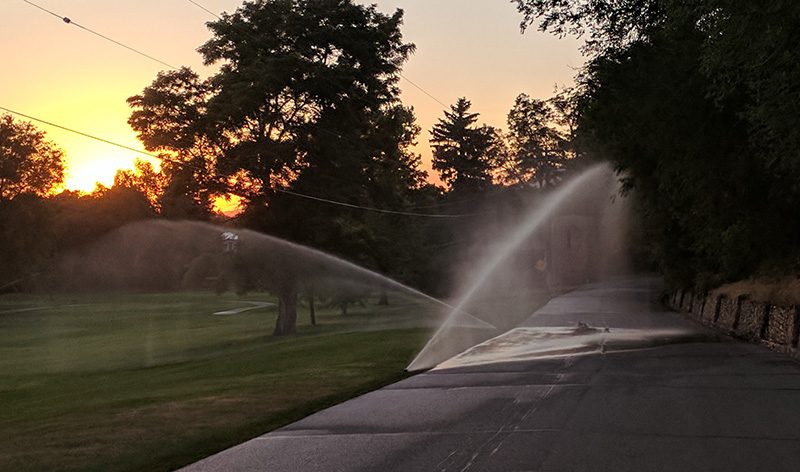 They’re overwatering the golf course and the road!

Through the rest of the round I couldn’t help noticing how soggy and wet the course was. Approach shots all had to be long because they would not bounce forward. Chipping was difficult because the shots would hit such soft ground and stop almost instantly. The greens were so soggy that player footprints made putts bounce all over the place. If I stood in one place I would slowly sink, leaving a large depression.

The course was nice and green though. Sigh. I get that we are no longer in a drought, but good hell ease off on the water. Let the ball bounce. Allow the player to run up some shots. Every course doesn’t have to be as green as Augusta National Golf Club. Take links golf in Scotland for instance. The ground is very hard. The golfer can be creative by running the ball and using the contours of the ground, rather than just having to fly shots to the target.

It’s got to cost more to maintain courses that are so wet. First there’s the water cost. Second, the grass has to be cut more often and something has to be done with the clippings if they’re not mulched. Then there’s the mud issues like I saw at this course. There were areas so wet they had to be roped off. 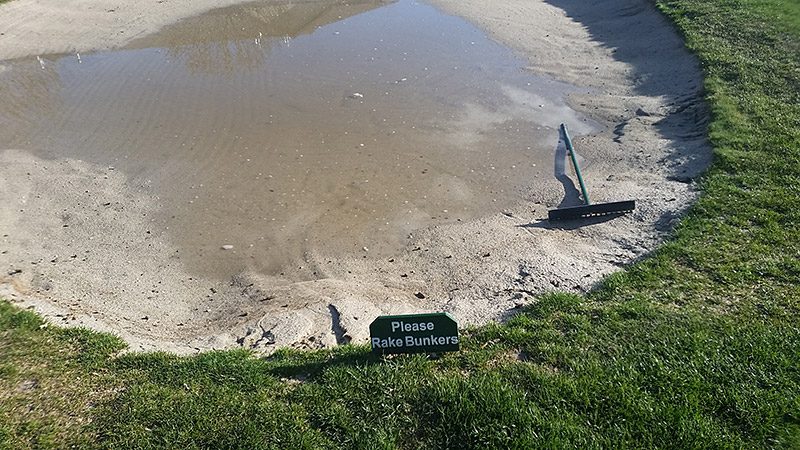 Please rake the bunkers, in your scuba diving gear…

I ended up in one of those roped off areas short of a par-4. At the time I was in the midst of an awesome round at -3. I had to take a drop because there was standing water. Nearest relief was in the fairway. I hit my chip and the ground was so wet that the club sliced through the turf and went under the ball entirely! I don’t think the club actually touched the ball.

Take it easy with the watering. Let your members have some fun with longer distance and more creative ground game shots.