I may be fooling myself, but I like to think I hit certain clubs fairly accurate and consistent yardages. When I have an exact yardage to my target it helps me confidently pick the right club and put a solid swing on it.  That’s one reason I typically prefer laser rangefinders over GPS devices on the golf course.  I can shoot anything and get a number.  Top lip of the bunker guarding the front of the green is 127 and the pin is 135.  Perfect.  I know just what to hit.

Laser rangefinders are not typically inexpensive.  The Bushnell Pro X2 laser I recently reviewed is $500! That’s a lot of dough for golfers on a budget or who only play a few times a month or even a few times a year.  Luckily the more affordable laser rangefinder space has an excellent player in it, TecTecTec.  TecTecTec makes several “affordable” lasers which start in price from $149 and max out at $249.00.  Many of the features found in the more expensive laser units come standard in TecTecTec lasers.  Today’s review is the VRPRO500S.

The VRPRO500S is not the least expensive offering from TecTecTec.  It’s the next level up, and can be found on Amazon for only $179.99. This model comes in a very small and convenient size. See the photo below. 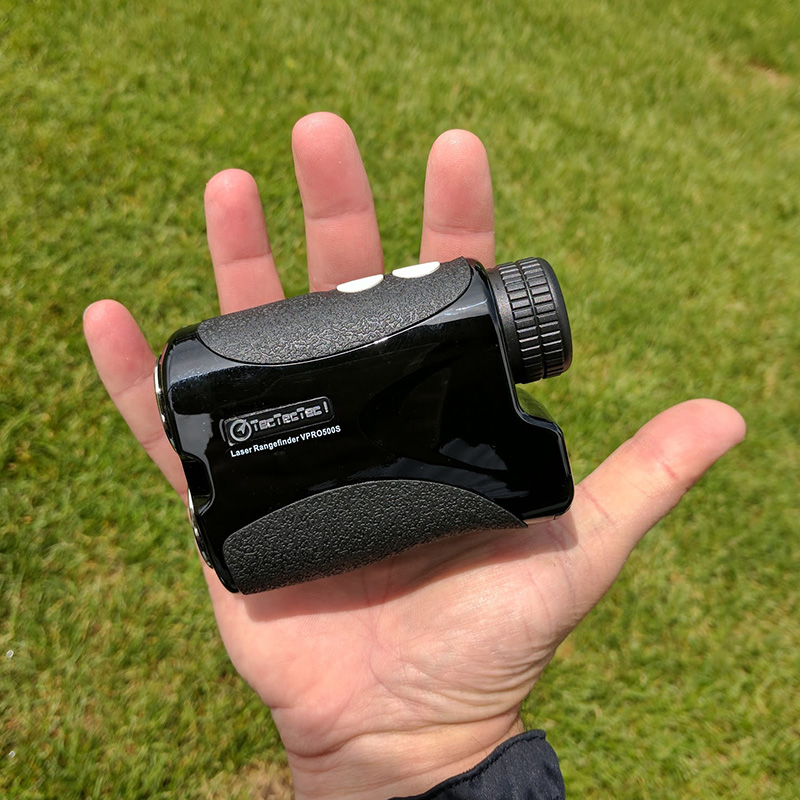 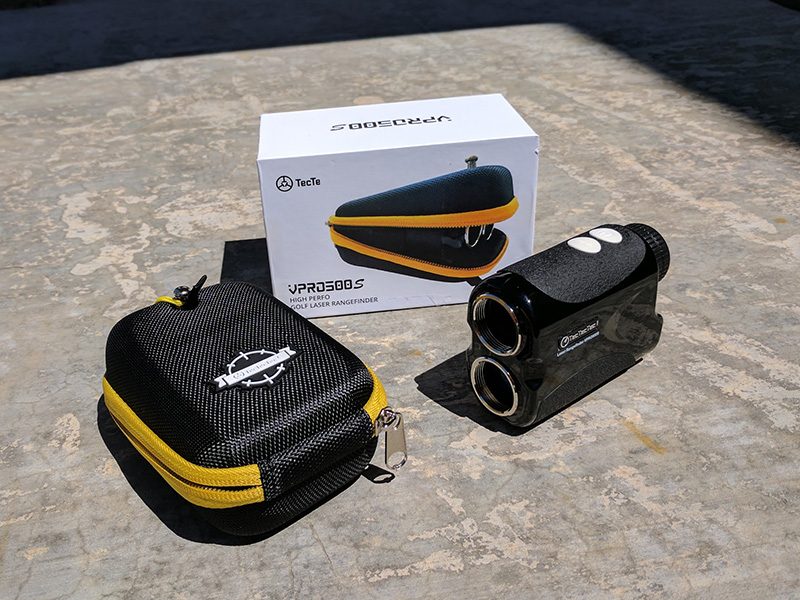 The VRPRO500S performed fairly well on the course for me.  Keep in mind I’m used to gaming lasers that are 2-3X the cost.  I found that in most situations I was able to get an accurate yardage quickly.  The numbers on the display are clear and easy to read.  The visual through the 6x monocular multi-layer coated lens is clear and bright.

I don’t typically use slope when getting yardages with lasers because my rounds are almost always legit handicap or tournament rounds.  But for fun I used the slope a few times to get the hang of it.  The slop can be turned on or off via the “mode” button on the top.  The slope is quite cool.  The actual yardage is shown as normal, but under it is shown the yardage compensated for change in elevation.  For instance on one par-3 at my home course the yardage was 145 downhill.  With the slope turned on the unit told me the yardage would play like a shot of 137 yards.  The top of the display also shows the number of degrees in the slope, which is interesting.

There are also other modes and settings one can use the mode button for.  One is a kind of “scan” mode where you can hold the button down and the numbers will automatically update as you move it around.

Naturally the main mode I used is “Flagseeker” mode. LOL, doesn’t sound anything like Pinseeker.

One weakness this laser has over the expensive higher end brands is a situation I’ve ran into a few times.  The Flagseeker mode has a hard time locking in on the pin when there are trees close behind the pin.  More often than not the unit gives me the yardage to the trees, not the pin.  Bigger target.  In events like that all is not lost though.  I’ll just shoot the ground at the bottom of the pin, or shoot the false front, or better yet shoot players if they’re still putting.

At $179 the VRPRO500S is a great value in golf laser rangefinders.  It’s difficult to find many with slope in that price range, if there are any others at all.