If you were to look at me you would notice that my right arm and right thumb are Popeye sized, about 4x bigger than my left.  Over time the mouse button which is the trackpad on my 17 inch Macbook Pro has been getting harder and harder to click. I’m talking to the point of having to push so hard with my thumb that I was getting tendonitis in my right arm.

After some reading I found someone who suggested to “push down hard” on the mouse.  I tried that, which didn’t feel right, and it helped slightly for a day or two.  Then the problem returned.  I didn’t want to break the trackpad by pushing too hard again.  After my own examination I realized the stiff Macbook Pro trackpad was not the problem, it was a symptom of the problem.

The real problem was the nearly seven-year-old battery.  I’d read some warnings saying the battery needed to be replaced, and the battery time had gone from 4-5 hours to 4-5 minutes.  I just figured it was dead.  But these kind of LIPO batteries are not safe when they get old.  They puff up, and can literally burst into flames.  As it turns out the battery was swelling and that was pushing up on the trackpad (image below). 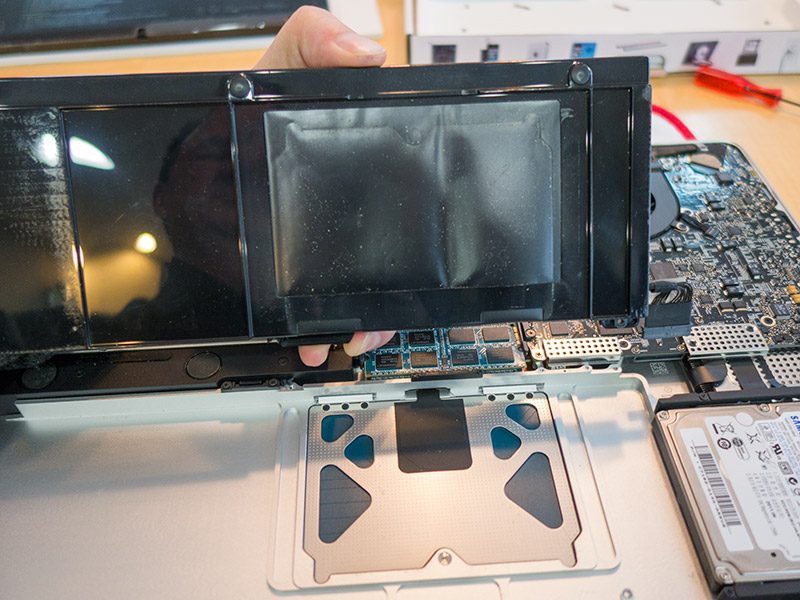 17″ Macbook Pro Battery Replacement – See the battery all puffed out?

The local Apple store wanted something like $130 plus installation for this battery, which was not in stock.  I found a Newer Tech battery at Other World Computing for $99.00 and figured if I can build a hexacopter drone from scratch with no instructions, I should be able to take out an old battery and put a new one in.

The battery kit came in two days and even came with the tools needed to install it.  In less than 10 minutes I had the new battery installed and I’m now happily typing on my newly fixed Macbook.  The mouse is SO easy to click and so smooth.

This is a golf blog and this isn’t really golf related, though I did write for the Apple Blog for a few years.  I can now golf blog more easily.  That said, I posted this in hopes that someone else who has this issue doesn’t break their trackpad and avoids an exploding battery.

I figure in a month or so my right arm and thumb will shrink back to normal size.