I’m not big on tattoos. If I ever get one I was considering getting a washed out boat anchor on my forearm. That way when I’m 80 years old it will still look the same.

I must admit I’ve recently been fantasizing about getting a tattoo of Bubba Watson on my calf, but not any old Bubba Watson though. It would be “right-handed coal miner” Bubba Watson. The “tat” (that’s what cool people call them) would feature Bubba wearing a PING hat. Of course we would have to hope he doesn’t change sponsors. Bubba’s face would be covered in coal marks and he would be wielding a right-handed driver. 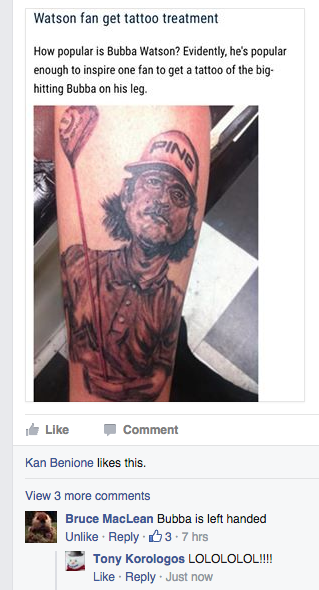 Dammit I just found out someone already has the right handed coal miner Bubba Watson on their calf! See photo. What a bugger. Now I have to think of something else.