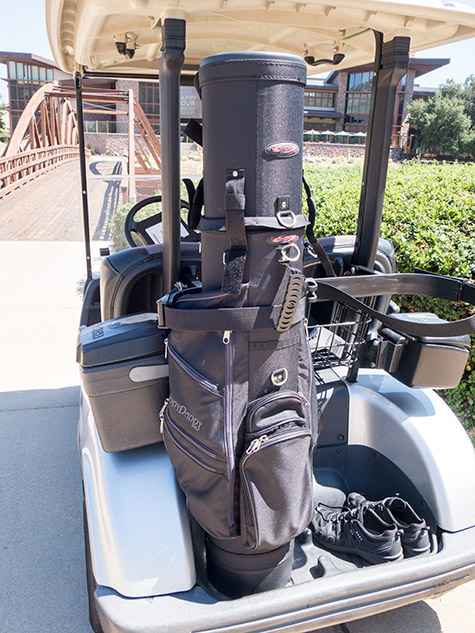 I believe in doing proper golf equipment reviews by putting the gear to use in the actual situations it will be used in.  That’s why it took a little while for me to get this review done.  I’ve been using the bag as a standard bag for a few rounds, but just needed to get the thing on an airplane, thrown around by baggage handlers, and put through the paces.  I needed to test out the Caddy Daddy Co-Pilot Pro golf travel bag while traveling via air.  This past weekend at Pechanga in Temecula, California was a good test.

Hybrid Golf Travel Bag – What Is It?

The Co-Pilot has a hard top which protects the heads of the clubs, and has wheels at the bottom of the bag for rolling through airports.  Those along with a rigid shell make for the travel component of the bag.  Multiple pockets on the outside and sectioned club slots make up the regular golf bag component.

It’s a travel bag and regular playable golf ball all in one.

There are three versions or models of this bag.  The unit I’m reviewing is the Co-Pilot Pro.  That’s the middle-of-the-line model which retails for $159.99 but I found on Amazon for $128.  The lower model is the Co-Pilot Standard edition, while the largest model is the CaddyDaddy Co-Pilot XL golf travel bag.

These bags are fairly frill free.  Not much of a color selection other than choosing a blue or gray trim against a black bag.

On The Course – In Airports – In Action

The overall footprint of this bag is much smaller than the golf bag/travel bag setup.  So small in fact, the bag fit in the trunk of my cheap rental car, a Nissan Versa.  The bag fit with the hard lid in place and not removed.  The Versa is not a large car.

Putting the lid on with all the clubs isn’t too hard.  Several velcro straps secure the lid, and there are some round metal loops on the bag I used to put carabiners to act as a safety for the lid.  The straps are a bit of a pain as they go through loops which are a little tight, but keep the straps from coming off during travel.

Carting the bag in the long term parking to the shuttle stop and then from the shuttle to the baggage drop-off is aided by a well placed lid handle on top and the wheels on the bottom.  Because of the narrowness of the bag though, it is easy for the bag to tip sideways when rolling.  Not a major issue.

As I was waiting to get off the plane yesterday I watched my bag as it went down the belt from the plane into the grizzly baggage handler’s hands.  I could tell he tossed heavy bags around for sport, probably as training for his run in the UFC heavyweight division.  He grabbed my bag and threw it from the belt into the bag container, at least 6-7 feet in the air.  The bag did it’s job and my clubs were unscathed.  The bag was unscathed as well.

As mentioned before my first critique of the bag is the strap system which secures the hard top.  The setup is a bit of a pain to use.  I think it could be better designed.

My second critique is the weak zipper handles.  I put my golf shoes in one pocket, which made it a little tough to zip.  I bent the zipper trying to close the bag, then broke it off trying to unbend it.

On the name I often have a semantic reaction when I see the word “caddy.”  A “caddie” is a person who carries golf clubs.  A caddy is a small storage container, often used for tea.

The CaddyDaddy Co-Pilot hybrid golf travel bag is two bags in one, saving space and cost.  Most importantly it saves your golf clubs from damage during travel.  At under $130, it’s a good investment to protect the contents inside, which are likely worth many times more than the cost of the bag.