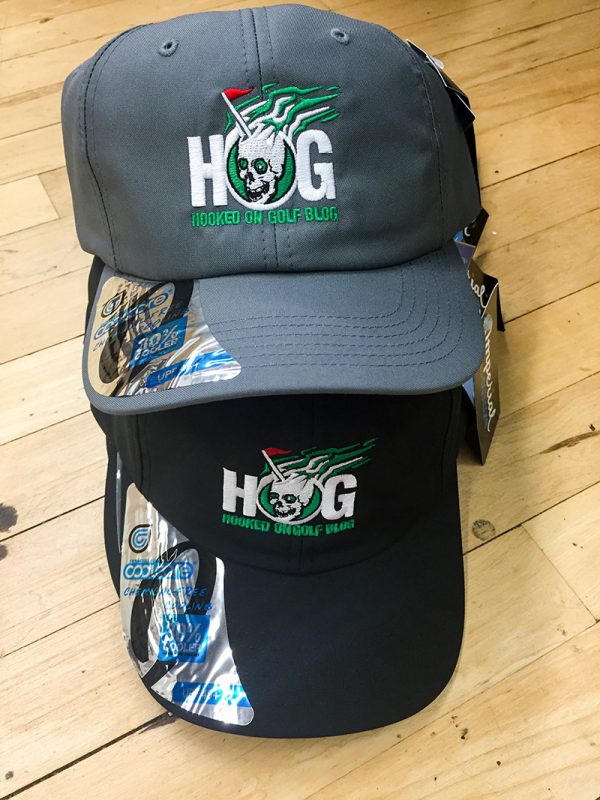 About an hour before I left for the airport and my big european vacation the UPS guy delivered a box. Perfect timing.  Inside was a batch of new Hooked on Golf Blog hats made by Imperial Headwear.  The europe trip would be a fantastic way of putting one of these hats to a stern test.

On the first day of my trip in Greece I visited the famous Acropolis in the center of Athens.  Anyone who has visited that spot in the summertime knows there are few hotter places on earth.  The place is super dry, exposed, and you are hiking up and down steps.  It’s a sweat factory.

While sweating hard huffing around the Acropolis and in Athens I could not help but be impressed and stunned by how cool my head felt, especially given the conditions.  My sweat had not soaked into the seam on the front where the bill attached.  There was no nasty sweat line on the bottom-front or on the first inch or so of the bill.   Somehow the fabric and the Coolcore technology helped to get that cranial moisture to evaporate rather than soaking into the hat.

The next day I spent farther north of Athens in a place which has incredible monasteries.  Getting to the monasteries required hiking on extremely steep trails and thousands of super-vertical rock and marble steps.  It was like doing miles of stair-master exercises in the heat of summertime in Greece.  Once again, the hat kept my head cool and more dry than any other hat I’ve worn.

My trip then found itself on four different Greek islands and the lovely small fishing village of my grandfather.  Hiking around there, and boating from island to island I once again found my Coolcore hat to perform fantastically.  No sun in the eyes, dry, cool, comfortable.

All that performance is fantastic but to put the hat over the top it looked fantastic, especially with the Hooked on Golf Blog artwork embroidered on the front.  #style

After Greece a few days in London gave me the chance to try the hat in some cooler temperatures and some pretty substantial winds.  I’m sure I had the coolest hat in all of England, all due respect to all those hats with British flags on them.

After schlepping my hat thousands of miles and walking miles and miles, my Coolcore looks just like new still.  There isn’t even a wrinkle in it.

As you can see by the brilliant artwork on my sample hats, Imperial does custom logo on the Coolcore hats.  I must say the gray and black model HOG hats look stunning with such sharp and accurate embroidery.

If you’re just shopping for single hat which will offer the best in cooling this summer, pick up a Coolcore.  If you need a bunch of custom logo hats for your golf club, your business, or your blog, I highly recommend Going the Imperial Coolcore direction.