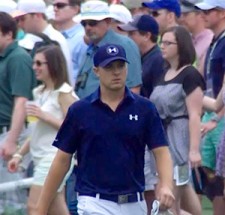 I say it every year.  The Masters never disappoints.  2015 is no exception, though some were critical of the Sunday round.  I agree that it was not a typical Masters Sunday, with many players “charging” and contending, swapping the lead.  Because Jordan Spieth was so dominant the first three days and did not wilt in the final round, there were no Sunday charges to be had.

After Thursday’s 64 I predicted a golf media “premature Spiethgasm,” knowing the media was going to go all ga-ga over Spieth.  With the downward direction in Tiger Woods’s game, it seems the media is trying to glom onto a new nipple. Now that Spieth finished the 2015 Masters off in a classy, multi-record-breaking fashion, the golf media now has my permission to enter their full-on Spiethgasm.  Lock it on.

It was truly an impressive week.  Spieth is the real deal, no doubt.  I had the opportunity to cover Jordan when he was 16 years old and made the cut in a PGA Tour event, the Byron Nelson.  Yes, 16 years old.

He’s not a bomber like Dustin Johnson, but long enough. He’s not a short game wizard like Phil Mickelson, but his short game is solid (up-and-down on 54th hole for example). I find it hard to pinpoint a signature part of Spieth’s game.  I’m not sure what his strengths are.  It would seem his game is so balanced, that his strength is a lack of weakness in any area.  The only minor issues this past week which did cost him some strokes here and there, was the occasional blocked drive to the right.

Jordan’s world ranking is now #2, right behind Rory McIlory.  I love how different the styles between these two is and look forward to a budding rivalry between them in the years to come.

It was slightly difficult to watch Tiger Woods this weekend.  You could tell he was trying as hard as ever, and after two solid middle rounds we even saw a fist pump, like the old days.  Also like the old days, we saw the whirly-bird driver flying out of his hands and heard on a national broadcast “oh my f***ing God,” when he duck-hooked a drive into the left trees on the par-5 13th.

Tiger looked pretty good to me.  No back issues.  Short game looked decent.  The part of his game that looked bad was his driving, with the head dipping down drastically.  When he does that bad things happen.  Is Tiger “back?”  I’m not sure he could ever be back to what he once was.  Time will tell.

When Tiger hit that root in the final round and hurt his hand I was thinking to myself, “oh no, not another withdraw due to injury.”  I’m glad he was able to “put the bone back in place,” or whatever it was he did.

I actually dreamed Saturday night that Phil won his 4th green jacket.  He put on a good show, and perhaps might have won if Spieth wasn’t in the field.  It was a great showing by Phil, with many entertaining shots.  I was surprised how often he used putter off the greens this time around.

Maybe that dream was a premonition for 2016 or beyond.

I had a “feeling” Rory McIlory would not be in contention.  He started out slow but showed that he could play Augusta National very well.  But in the end, he didn’t have enough this week.  I feel the self imposed pressure he has on himself to complete the career Grand Slam by winning the Masters will make it much more had to win at Augusta than it should be.  No doubt he has the game to win there, but his mind might get in his way.

Charley Hoffman was a pleasant surprise this past week.  He had the lead for a while and was right up there most of the weekend. Amazing what cutting off the mullet can do for one’s golf game.

Justin Rose was the closest threat to Spieth.  The guy is a total stud.  Fearless.  I really like his game and his style.  He’s gutsy.

Dustin Johnson set a Masters record with three eagles in one round.  That’s impressive.

Jason Day and Adam Scott didn’t do close to as well as I thought they would.

Of course, it was nice to see the goodbye tour of Ben Crenshaw Friday.

Naturally, Augusta National looked as great as ever.  It played a little easier than I thought.  Perhaps they’ve accepted that they’re not a U.S. Open and it is okay for players to make birdies.  That style of golf is more exciting for most “patrons.”

The second Jordan Spieth made the final, winning putt I couldn’t help but look forward to the 2016 Masters Tournament.  Only 360 days to go!