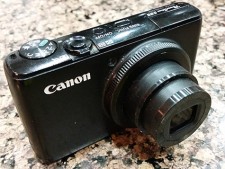 My broken Canon S95, with the lens which is stuck open… RIP old friend

A few weeks ago I posted a sad blog about the death of my trusty and awesome Canon S95 camera. The poor camera lost its mind and decided to swan dive into the toilet. When you see your $400 camera at the bottom of the toilet bowl there’s a slight delay as your brain processes the inevitable next action, reaching into the toilet. Fortunately the swan dive occurred prior to any activity, and not after.

I put the camera in a bowl of rice for a few days and upon attempting to power it up, the thing was dead. I wrote it off and have since been trying to figure out how to replace it on a blog’s revenue. The replacement was slated for 2073.

Good friend and golf entrepreneur John Hartline from Tornado Tee asked if he could take the cam and try an industrial plastic drying machine on the S95. I had nothing to lose.

After days of sitting in this machine I got my camera back today. It powered up, and the lens was retracting, unlike before. The screen though, was black. I could snap pictures which all turned out black as well. I fiddled with it for a few more minutes when suddenly the black screen came on and showed the correct image. Seconds later I was happily snapping photos.

Thanks to John for trying that. Saved me some bucks, and reunited me with a trusty old friend who was one of the most crucial tools of my golf blogging arsenal, and also one I use a ton to shoot family pics.

The camera has been resurrected. I’m frightened to look at a calendar, but I’m guessing it died 40 days ago.

Next it will walk on water and then turn water into wine.

PREVIOUS POST
Why Is This Boring? What Does WITB Really Mean?
NEXT POST
WITB Week - What's In MY Bag (WIMB)