The Truth About “What’s In The Bag” (WITB) Articles/Photos

“Every week I excitedly wait for my favorite golf website to post the latest Tour winner’s WITB (what’s in the bag?) photos.  I immediately drive to Dick’s Sporting Goods and buy the exact set, knowing that if some PGA Tour pro wins with them, they’ll help my game.”

Said no one with a brain…

One of the easiest posts for lazy golf journalists is the “what’s in the bag?” photo.  This is a great alternative to actually working to create a meaningful, quality, and interesting piece of journalism.  It’s right up there with the “will Tiger break Jack’s record?” and “who is in your dream foursome?” drivel.  The web is full of it.  It fills up space and keeps Google chewing on keywords which help the website’s SEO. 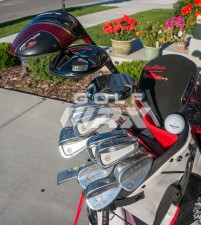 I especially like the watermarked WITB photos.  After all, this is photographic genius we are talking about.  Better watermark that shit so it doesn’t get stolen and win some million dollar prize or something.

The Truth About WITB Photos

Why are we subjected to this meaningless garbage every week?  For the source, it is a low hanging fruit.  Easy pickens.  Five minutes.  An easy bet, like a 1-handicap playing a 17 straight up.  It’s also a great way for some of these journalistic outlets to pat the back of their paid equipment sponsors.  Gee, what a coincidence eh?

Is this information useful at all?  Not for 99.9% of amateur, or even most pro golfers.  What’s in the bag for a given PGA Tour pro is typically a set of handmade clubs direct from the manufacturer’s tour truck, built precisely to the specs of the pro who will use them.  Some of the clubs are custom made just for that week’s course or conditions.  An average amtauter golfer could NEVER buy a set like this.  If he could, he would never be able to hit them.

Well, perhaps not that last one…

Now if you’ll excuse me I must take off.  The paper has come out of my dot matrix printer and the ink is almost dry.  I’ve printed off the latest watermarked WITB photos from WRX Digest, or was it Bunkers Hackerdice or something like that?  Anyway, I’m headed to Dick’s Sporting Goods to buy the exact same set of golf clubs James Hahn used to win last week’s Northern Trust Open, just in case…

PREVIOUS POST
Never Saw That Coming... Back9Network Suspends Operations
NEXT POST
Why Is This Boring? What Does WITB Really Mean?