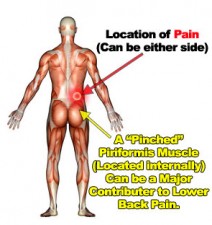 Any regular readers here or on my social networks know I deal with back problems. While I’d like to say all my back problems are behind me, ahem, sadly they are not. I have some arthritis in my lower back, probably a result of playing the drums since age five, and sitting on a drum stool for thousands of hours. Once in a while I turn the wrong way, pick up something too heavy, or sneeze wrong, and a nerve pinches in my spine. The feeling when the nerve pinches is like having my spine plugged into a 240 volt power socket. Shortly after the shock, the muscles in the area begin to spasm, producing sharp pain unlike anything I’ve ever experienced. I’ve dislocated shoulders, broken bones, separated shoulders, pulled hamstrings from the bone… NOTHING compares to stabbing lower back pain and spasms. Nothing.

The spams and shooting pain are completely debilitating. It is so bad that I can’t reach my feet to put my socks on or tie my shoes. Getting up and down from a chair, or in and out of the car is horrible. When you yelp in pain from wiping your own ass and fall on the floor in the bathroom, you know you have a real problem.

This past Friday while drying my toes in the shower, I felt a small electric shock in my spine. It was enough to stop me in my tracks and wait a minute to see if the spasms started. They did not. I thought I’d gotten lucky. A few minutes later while zipping my backpack I was hit with 240 volts and all I could do was yelp and say, “oh no.” I knew the next week my back would be stabbing with spasms and I’d be down for the count.

By Friday night I could barely walk.

Saturday morning in the shower I cranked the heat up and decided to try some strange stretches. I’d tried some recommended yoga positions the day before to no avail, but I wanted to golf so bad Sunday I thought I’d try some kind of funky stretch to see what might happen. It couldn’t get worse.

In the shower I’d heated up the lower back as best I could. I stood with my feet together facing parallel to the shower wall.  I reached over my body with both hands to the top of the shower wall, which I’d guess is about 7-8 feet high. I then began to bend my back in the same direction the spasms were forcing me to go, to my left side. I could feel the tension right in the spot where the nerve pinch was. I continued to maneuver my hands and feet and bend such that I was stretching the spine and muscles on the right side.  I would sometimes cross my feet and hands.  I remembered the doctor at the sports rehab place last year putting me on the barbaric machine which stretched your body, millimeters at a time. That was an effort to separate the vertebrae so that the pinched nerve would be relieved and the healing bodily fluids could work through the area. While that never worked, I thought this stretch might.

The stretching felt good, and I felt some relief after a couple of minutes. I decided to switch around and do the opposite stretch. My body would not bend that way very much, as that seemed to focus the bend right on the bad spot. I did it anyway, despite the pain. What the hell.  Why not?  I went back and forth between the two stretches.

When I got out of the shower I was standing straight up, not hunched over at a 25 degree angle to the left. Somehow I’d straightened myself out.

The lovely bride instantly noticed that I was straight and not crooked, and commented about it.

For the next couple of hours I was slightly sore, but stunned at being able to stand straight up with no spasms or stabbing pain only a day after a bad tweak. Normally I’d be expecting 6-7 days of spasms, 6-7 days of laying on the floor. By the afternoon I had a golf club in my hand and was testing out some ginger swings.

Sunday morning it was a bit stiff, as my back often is in the morning. Sitting in a chair didn’t help so I tried to stand. Some of the muscle tightening was back but not terrible. No spasms or stabbing pain. I did the stretches again in the shower and had almost complete relief after.

By 12 noon on Sunday, I was hitting a 290 yard drive up the middle of the first fairway.

My back is as unpredictable as 20-handicapper’s driving accuracy.  I’ve found solutions in the past which seemed to help once, but not again.  I’m hoping that this stretch I found is one which will work more than once.  Logically speaking I think the strange contortion is separating the vertebrae and stopping the pinched nerve.  Once the pinch is done, the muscle spasms stop and there’s some residual soreness but general relief from the problem.

I know my back will go out again and I fear it going out on a Scotland trip or at a terrible time.  When it happens again, I’ll try this stretch.  Only then will I know if this past time was a one-time gig, or if it is a real solution to the problem.