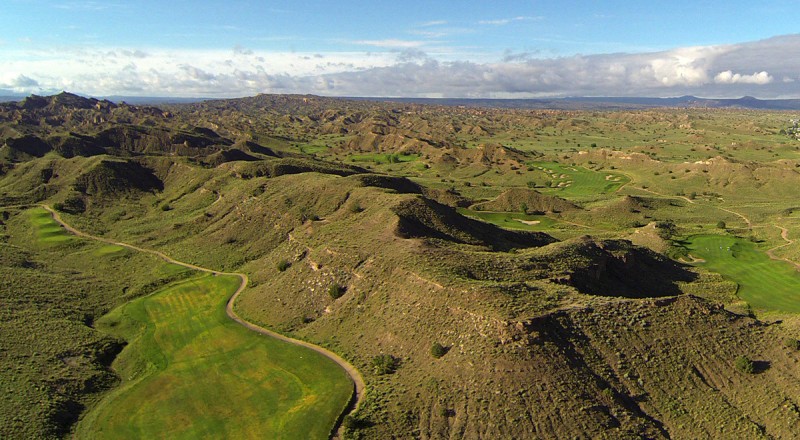 One of the many HOG World Tour stops, Black Mesa Golf Club in New Mexico

As of today Hooked On Golf Blog is 10 years old.  TEN YEARS.  Back on December 5th, 2004 I posted my first golf blog, “You can only understand if you golf.”   It was certainly not award winning material.  I’d give it a D+ today, but I’m sure Tiger Woods didn’t hit his best shots when he first picked up a club.

I started blogging at the suggestion of my best friend Alan Nelson.  Back in 2004 he told me blogging would be big, the next big craze on the internet.  Alan is a wise man and when he has a suggestion I take it to heart.  This was before Facebook or Twitter.  When I asked what I should blog about, he said “something you love.”  I had to choose between rock & roll, strippers, pizza, and golf.  I chose golf, though I think if I chose strippers I’d probably be a millionaire by now.  Thanks to Alan’s suggestion, HOG exists.

The 10 years I’ve been running this blog have been amazing.  I’ve worked hard to build up about 5000 golf articles, over 20,000 golf photos, hundreds of videos, several other golf sites and associated social networks.  I’ve played some of the world’s most amazing golf courses, many which had not even opened to the public yet.  I’ve had the pleasure of reviewing much of the world’s best golf equipment, golf apparel, and golf accessories.

In short, I have a reach to a large audience.

You can tell Miss Universe digs me. Just look in her eyes.

Because of this golf blog I’ve met some of the coolest people on the planet.  A few notables include Jack Nicklaus, Chi Chi Rodriguez, Robert Duval (yes the Academy Award winning actor) and Miss Universe, Stefania Fernandez.  Miss Universe is a lot better looking than Chi Chi, though not as entertaining.  I’ve met many stars in golf and business, but the real people in the industry are the ones who have had the biggest impact on me.  I’m talking about the people who run other golf sites, work at golf courses, design golf courses, work for golf manufacturers, work in PR firms, and even caddie.  These people are the heart and soul of this industry and the game.  I’m thrilled to have established so many relationships and friendships.  I plan to mention many of you in my people post.

I had intended to recap the last 10 years in this 10 year anniversary post, but I’ve spent a good hour on just calendar year 2005.  So I’m going to break it up a bit and post some look-back posts for the last 10 years.

Next up, the birth and first years of HOG.  Look for the next post.