How I Recovered My Stolen Android Smartphone, Which Had Traveled to Jefferson City, MO

I’m going to cover a non golf related subject today, but one which I think is very important: what to do if your smartphone is lost or stolen and how to recover it.   I hope someone out there can benefit from what I learned and the tools needed pull off what I did.  Here’s the story:

The last HOG World Tour trip was to Black Mesa Golf Club in New Mexico.  It is a short flight from here in Salt Lake.  While waiting at the gate for my flight, I utilized a cell phone charging station to charge up my Samsung Galaxy SIII.  The Galaxy SIII phone is based on Google’s Android operating system.

In the rush to get to the gate when called, I apparently left my phone at the charging station.  I didn’t realize I’d done so until I was on the rental car shuttle in New Mexico, some 2-3 hours later.  I called my phone from a friend’s phone and even sent text messages to it, but there was no response.  I immediately contacted Delta Airlines and also checked with the airport lost and found.  Nothing.

When I arrived at my hotel in the evening I powered up my laptop and jumped online.  I loaded up the Android Device Manager in my browser, which is located here: https://www.google.com/android/devicemanager.  The device manager can also be loaded onto an Android unit and run as an application.  I used the device manager to lock the phone with a password to prevent whoever had it from using it.  I also put a message saying “Return this phone to its owner by calling…” and put the wife’s phone number.  Of course, nobody called.

Device Manager located my phone on a Google map.  It was in Jefferson City, Missouri.  It should be noted that in order for Android Device Manager to actually locate your phone, the phone must be powered on.  Fortunately for me, whoever had the phone left it turned on. 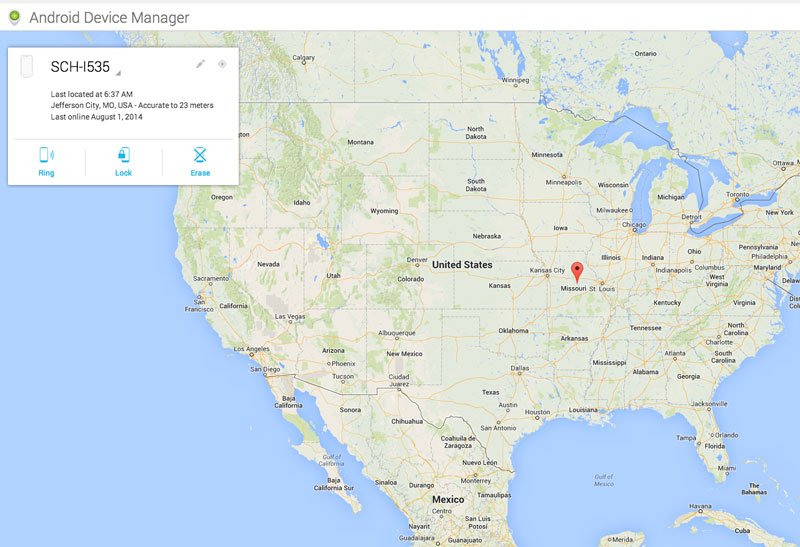 I zoomed the map in as far as it would go and noted the exact location and cross streets. I then loaded up Google maps in another browser window and navigated to that same location. I then switched the map view to Google Earth, where I could see that at my phone’s location was a single family home. This was good, rather than it being at a large apartment complex, or in an office building, or on the street somewhere. In Google Earth I was able to simply click the mouse on the home and it showed the home’s address. From there I punched in the address to a regular Google search. The information I was able to gather at that point was quite amazing, clear down to the yearly property taxes on that home. 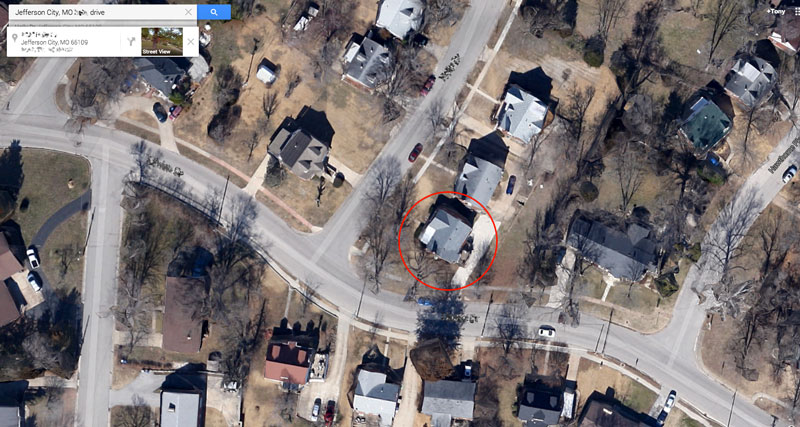 My phone was here…

Armed with this information, I contacted the Jefferson City police department.  Despite all the information I gave them, they were not willing to do anything because the phone was stolen from the Salt Lake International Airport.  I had to first establish a case with Salt Lake, then they told me Salt Lake would have to contact them.

I called the Salt Lake International Airport Police and they were quite helpful.  One officer asked me the exact time and location I was waiting for my flight.  He cued up their surveillance footage and found me sitting there. He said he would have to scan to see when someone took the phone and would call me back.  He gave me a case number.  The officer did call back to tell me he found the video footage showing the thief taking the phone.  A younger male, perhaps late teens, walked up to my phone and looked all around.  He then unplugged it and put it in his shirt pocket and walked away.

The next morning I was golfing at Black Mesa golf club when I received a call from the Jefferson City police at about eight in the morning.  “Sir we have recovered your phone.”  I was thrilled.  They told me they’d paid a visit on the home where my phone was located and recovered it at 7 a.m. local from an elderly lady.  That seemed odd but I didn’t care.  My phone was found.

Later I spoke with my wife who had received a call from the elderly lady.  The lady told my wife she saw the phone at the airport and took it because she knew it was lost and did not trust that the airport lost and found would get the phone’s owner back his/her phone.  She had intended to take it home to Missouri and mail it to the owner.  She told my wife the police frightened her, pounding on her door at seven in the morning.  My wife bought this BS story but that was until I told her that airport surveillance video showed a young male taking the phone.  The stories didn’t jive.

It took eight days to get my phone back.  I’m very glad to have it back because on it are some special photos and videos of my baby boy, and of course all the other things one digitally stores in a smartphone.

As for the case, I’ve heard nothing else.  My theory is that a teenager stole the phone and his mother or grandmother made up the story of taking it to cover his ass and keep him out of trouble.  I may never know the real story, but I do know how to recover a stolen Android phone now.

I hope this story helps someone who may end up in a similar situation with a lost or stolen Android device.

2 responses to “How I Recovered My Stolen Android Smartphone, Which Had Traveled to Jefferson City, MO”