Book Preview: Draw in the Dunes by Neil Sagebiel 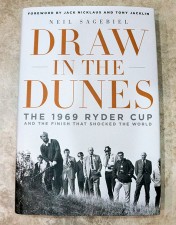 Oh boy am I stoked for the latest book review submission here at HOG World Headquarters.  Sorry to the rest of you authors, but you’ve all been bumped down a spot.  My good friend and fellow golf blogger Neil Sagebiel is a fantastic writer.  I absolutely loved his book The Longest Shot – Jack Fleck, Ben Hogan, and Pro Golf’s Greatest Upset at the 1955 U.S. Open.

Neil’s latest book comes just in time for the 2014 Ryder Cup.  I can’t wait to read Neil’s accounting of the 1969 Ryder Cup, which I’m sure will capture it greatly with his attention to detail and deep research.

Below is some PR for the book:

In 1969, the Ryder Cup teetered on the brink of relevancy. It also teetered on perhaps being discontinued. The U.S. had dominated the British for the first 42 years of competition since the formation of the event, winning almost every single time it was contested, often times by large margins of victory. Celebrated author Neil Sagebiel has uncovered one of the great stories in golf with his new book, DRAW IN THE DUNES: The 1969 Ryder Cup and the Finish That Shocked the World, Foreword by Jack Nicklaus and Tony Jacklin (Thomas Dunne Books, September 9, 2014).

Royal Birkdale was the site of the 1969 Ryder Cup, and all the experts gave the U.S. a resounding position as heavy favorite to again retain the Cup. With Jack Nicklaus, Lee Trevino, Billy Casper, Dave Hill and Miller Barber among its star-studded roster it seemed inevitable that the U.S. would win. Great Britain was led by the great Tony Jacklin along with European stars like Neil Coles, Christy O’Connor, Bernard Gallacher, and Peter Alliss. Still, they were undisputed underdogs despite playing on their home soil. The British team believed they were capable of the impossible. They appeared to be the only ones that felt that way, however.

As Sagebiel shows, though, right from the first day of competition, maybe this wouldn’t be the slam dunk romp for the Americans everyone thought. In fact, 17 of the 32 matches over the three days of competition were not decided until the final hole. Nerves were fraying by the match, and tempers flared from time to time. But nothing could equal the electrifying matches between Jack Nicklaus and Tony Jacklin, especially their battle in the final singles match on the last day of the Cup. The two titans waged a classic right up to the 18th hole. And then, one of the most amazing and completely shocking moments in golf history took place.

DRAW IN THE DUNES is the gripping account of a legendary Cup competition, and the story of golf’s greatest act of sportsmanship.

PREVIOUS POST
Top 10 Nauseatingly Repetitive Questions Golf Publications Keep Asking Over and Over..... and Over... Again... and Over
NEXT POST
FootJoy City Shoe Review