Get Ready for a Deluge of Crappy Golf Course Drone Photos

Since October of last year I’ve been a “UAV pilot,” so to speak.  UAV is short for unmanned aerial vehicle.  These are small remote control helicopters which some are also referring to as “drones.”  The word drone has a bit of a bad reputation, associated with remote killing machines used by the military, or perhaps used for spying.  Rest assured, I’m not interested in the spying aspect or seeing your wife sunbathing in the back yard.  I’m much more interested in getting good aerial golf course photos and aerial golf course videos.   Good photos NOT like the two below.

My eyes! I’m falling off the earrrrtttttthhhh!

Drones are becoming more and more popular as the affordability of them increases.  Most of the little drones are only big enough to carry GoPro cameras.  GoPro’s have their place and have exploded in the action video world.  But their still image capability is pretty bad.  The lenses on GoPros are super-wide for great HD action video, but that does not translate to decent photos.  The lens distortion produces photos that are quite fisheye looking.  Now that more and more of these drone/GoPro setups are airborne, we are going to see a lot of crappy artifacted fisheye distorted JPG’s of golf courses.

This green slopes back to front. You need mountain climbing gear to scale it!

I spent a lot of time with my smaller setup and GoPro.  I’ve been able to produce much better images with little to no distortion as compared to images like the ones above.  Check it out: 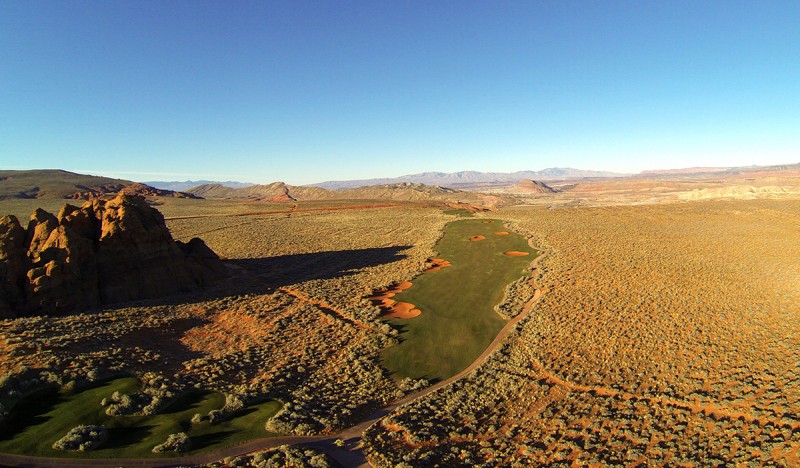 In this photo you don’t feel like the earth is a the size of a beach ball and that you’re going to slide off!

My second, bigger setup has gone beyond GoPro.  This bird is a much bigger vehicle and can put far better camera in the air.  No lens distortion (unless wanted) and far superior photo quality.  I’m still tweaking this setup, but you can be sure I’ll be posting some photos and video from this beast soon.  Check out the big bird: 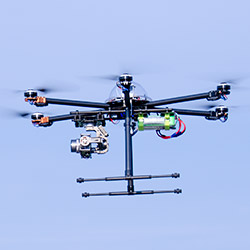