Flipper – King of the Green 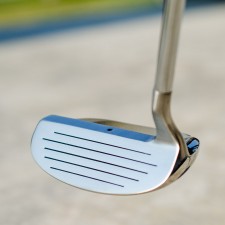 Can a chipper (or Flipper in this case) be the cure for the chip yips? I’m desperate enough to find out.

Sitting in my basement still in the shrink wrap for many years, is the club which could be my secret to rounds in the 60’s and the end to my short game frustrations.  It could also cause me to be the subject of laughter and much ridicule by golfers who I may or may not know.  Say hello to the Acer Flipper, the king of the green!

Everybody sing with me!

My putting is tour-level quality, but my chipping and pitching is as bad as my putting is good.  In fact, I think I have the chip-yips.  I’ve practiced countless hours and taken many lessons, but when I get on the course some kind of gag reflex happens and I have very little control over my chip distance.  It has improved this season, yes.  But I give up at least 3-5 shots per round due to bad chipping.  Somehow I still manage to shoot in the low 70’s despite this problem.  Imagine if I could save those 3-5 shots?  I’d be scratch or better.

Perhaps with the Flipper I can use my putting stroke around the greens instead of the gag-chip thing I’m doing.

Laugh at me if you wish.  I’ll take it in stride.  If the Flipper works, great!  If not, I tried.

9 responses to “Flipper – King of the Green”

PREVIOUS POST
Possible Inside Scoop on One of Tom Watson's Ryder Cup Captain's Picks and He is Not Tiger Woods
NEXT POST
First Look: Gary Player's A Game For Life DVD Box Set