Many golfers fish.  Many fishermen golf.  Other fishermen used to golf…

My best buddy is in town and he’s an avid fly fisherman.  He talked me into cancelling my Sunday tee time (your money is safe this week gentlemen) and trying fly fishing with him as my guide.   My buddy gave me some lessons and background on the sport and the art, along with lessons on the types of fish and the bugs they eat.

It would seem I did okay for my first time.  I caught an 18″ brown trout and a very pretty rainbow trout.  I also had several “strikes,” where you snag the fish but it manages to get away.   These were all catch and release, as I don’t eat fish. 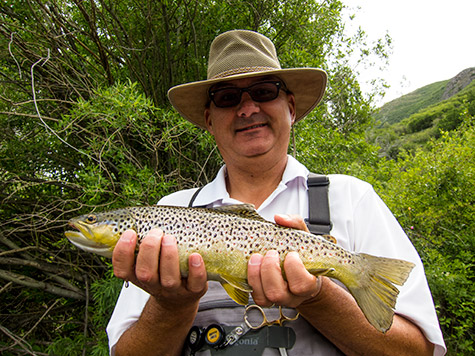 My first catch.. a brown trout…

There are some similarities between golf and fishing.  There is a definite technique to the swing as there is for casting.  Eye/hand coordination helps.

There are many differences between the two, some good and some not.   The good differences between fishing and golf would include not having to play out of someone else’s divot, five hour rounds, hacks who yell “mashed potatoes,” or having to buy a new fishing rod every 10 minutes (TaylorMade driver release cycle).  There also does not seem to be the fishing equivalent of being three under par with two holes to play and shooting 75.

The competitive component to golf is missing from fishing.  Examples would be match play, betting, tournaments, etc…  Or playing against one’s best score or perhaps trying to come back from a triple bogey to win.

The setting and the company for both are fabulous.