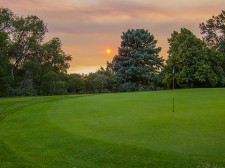 Coming into the 2nd and final round of the Richard C. Kramer Salt Lake City Amateur tournament I was in a tie for 3rd place in my flight with a fairly solid first round score. I was three shots behind the leader.  The only bad mistake in that round was a triple-bogey from one bad swing on the tough 485 yard par-4 18th hole, my 9th hole of the day.

The 2nd round proved to be much more difficult on several levels. First, the pins were tucked in extremely tough places. Getting approach shots close enough for good shots at birdie putts was very hard. I did manage two birdies, half my birdie total of the first round. I had 2-3 other good birdie chances inside 10 feet, but the subtle breaks around the holes and insane speed of the greens made those tough.

After the par-5 5th hole in the 2nd round, I was even par on the day. On the tee of the par-3 6th a rather unexpected hosel-rocket came off my 7-iron. Can’t believe it, but I shanked one. Right of that elevated tee is basically forest. I knew there was no way I wanted to find that ball because if I did, I’d have to play it. I had to re-tee and hope for a double-bogey five at worst. I hit the green and nearly made a great four, but logged the first double of the day. Still no problem, only +2 on the round.

From that point I was quite jittery. My nerves were getting to me. It is hard to explain what it is like. Imagine the feeling of drinking about 10 shots of espresso and how you’d have a high heart rate and trouble breathing. That’s what the nerves are like. I had some squirrely shots here and there, but also managed to recover and still putt well. On the 11th tee I hit one of those nervous squirrelly shots, pulling my hybrid to the treeline left. The ball was on grass but I had no swing. I had to bunt it to the fairway. From there I then missed the green from 125 and ended up carding the second double bogey of the day. Two bad swings at the wrong places where there’s no way to recover from them.

I played as tough as I could, trying not to leak too much oil. I did make a great birdie putt on the par-5 12th, an up-then-down looping putt of about 18 feet.

I had a birdie chance on the par-3 17th, but got too aggressive with the attempt. On these lightning fast greens that aggression left me with a tricky six-footer to save par which I missed. That was my first and only 3-putt of the tournament.

At the end of my round I felt like I kept it together somewhat, hoping I had not shot myself out of the money. I was disappointed in those unforced errors which resulted in two doubles. But I was apparently not the only one who struggled in the final round. Nearly all the players who were in contention in my flight after the first round except one, shot a higher score in the second round. Somehow my “disappointing” round moved me up one spot on the leaderboard! I moved from T3 to T2 with one other player. I finished three shots behind the champion.

Before the 2014 Salt Lake City Amateur Tournament started I would have been thrilled to finish in a tie for 2nd place in my flight. Part of me is thrilled at my highest finish and highest tournament payout ever. At only three shots behind the winner I can’t help but kick myself for the three really bad swings I made over the 36 holes. Those three swings accounted for seven wasted shots. If I don’t make those mistakes, I’m not tied for second.. If I don’t make those mistakes, I win the damn thing by four shots.

I’m probably being tough on myself. Out of 60 players in my flight, only one shot a better score than I did.

It is nice to be close. I’m happy about the final results. Hope to learn from the experience. I can’t wait for next year and my chance to clean up those loose shots and maybe even claim a victory.