Most people think of Utah as a ski destination and for good reason.  The snow here is regarded by many as the “greatest snow on earth.”  Golf has a huge impact on the state as well. The size of that impact was not really known until a 2012 study done by independent research company SRI, commissioned by Golf 20/20.  I was stunned at the impact and the numbers found in this study.  Golf isn’t just a game here in Utah, it is an industry.  It is an efficient industry which produces more dollars per acre than other big local industries yet has a fraction of the ecological impact.  All of this while providing a fantastic outdoor activity, green space,  scenic beauty, and providing jobs.

The 2012 golf industry in Utah generated $806.6 million in economic impact.

The golf industry in Utah accounts for over 9,600 JOBS.

Those jobs the golf industry creates in Utah produce $250.1 million dollars in wages.

Golf in Utah produces $16,035 per irrigated acre.  The nearest competing industry is alfalfa farming at $774 per acre.

For all of you who think golf courses take up too much space or use too much water, golf in Utah represents only 3.8% of the state’s turfgrass and only consumes 0.65% of the diverted water.

Golf in Utah produced over $11 million in charitable giving.

In light of these amazing findings, which I merely highlighted a few big ones, Utah Governor Gary Herbert signed a proclamation yesterday at the state capitol declaring May in Utah as the month of golf.  I was happy to be in attendance along with many of the biggest players in Utah’s golf industry. 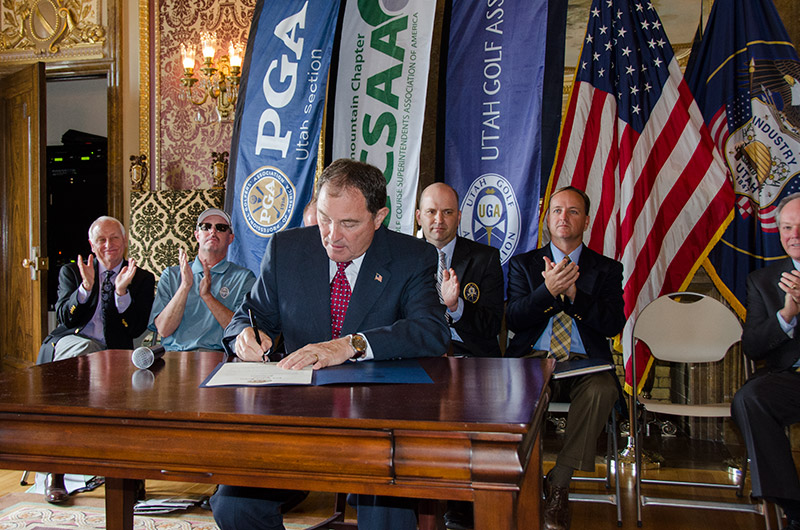 I had a chance to speak with the Governor for a few minutes and he is very excited about these findings, and helping the game to flourish and grow in the future. “The continued health and growth of the golf industry has a direct bearing on  future jobs, commerce, economic development, and tax revenues for a large number of Utah’s communities and industries.”

I let the Governor know of my independent work as a golf blogger and builder of golf websites, including the Utah Golf Guru site.  I joked that the study numbers and the $805.6 million are a little low since they didn’t account for any revenue created by Utah golf bloggers.  Make that $805,600,001.