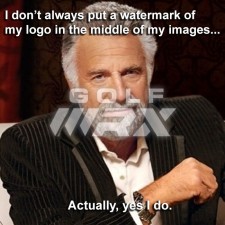 GolfWRX announced it will stop watermarking photos of golf bags which are full of hand-made, tour-only golf clubs that amateurs can’t buy, and if they could they couldn’t hit them anyway.

The Hacker’s Paradise announced that they’ll stop giving away golf gear in their website contests, also known as their ”buying fans” program. Site expected to shut down due to lack of traffic within 24 hours.

Back9Network has announced they will no longer post photos of Paulina Gretzky and will instead focus on golf journalism. Site expected to shut down due to lack of traffic within 24 hours.

I will not complain about my short game this season.

I will not complain about any part of my golf game this season.

10 out of 10 golf readers care about the “apparel scripts” of PGA Tour golfers and would love to see them posted for every tour event, and not just major championships.

TaylorMade Golf has announced that their latest driver model to be their last. It is so long, no other driver could ever be longer.

PREVIOUS POST
Fact: Women Can and DO Play the Old Course in St. Andrews
NEXT POST
Poorly Timed April 1st Post on TigerWoods.com - Tiger OUT of 2014 Masters Following Back Surgery