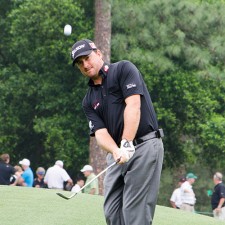 Nice job scribes.  Your incessant questioning of other players about Tiger Woods has caused one very good interview to go the “no comment” route now.    Graeme McDowell just commented that he will no longer answer anything but “no comment” when asked about Tiger Woods.  This is following an interview where 90% of the questions to him were about Woods, and some of his responses were inappropriately taken out of context:

“I spent 90% of my press conference last week at Bay Hill being asked questions about Tiger, speculating about where his game is right now… Many of my quotes have been taken out of context and spun quite negatively. It’s hard for me to comment on Tiger in the early 2000s… I can only say that he has raised the bar so much in the sport globally and players are so much better equipped to win these days… He seems more beatable nowadays simply because the players around him are better and have more belief thanks to Tiger moving the needle. I really shouldn’t get caught up in speculation and opinion especially when talking about TW. you set yourself up for failure!! Hence, “no comment” going forward!!” ~Graeme McDowell

Way to go golf press.  You beat GMac to death with Tiger questions and when he answers them honestly, you make him look bad.  That’s a shank out of bounds.

The fact is that professional golf NEEDS more players like GMac; guys who are approachable and will give you an honest answer and opinion.