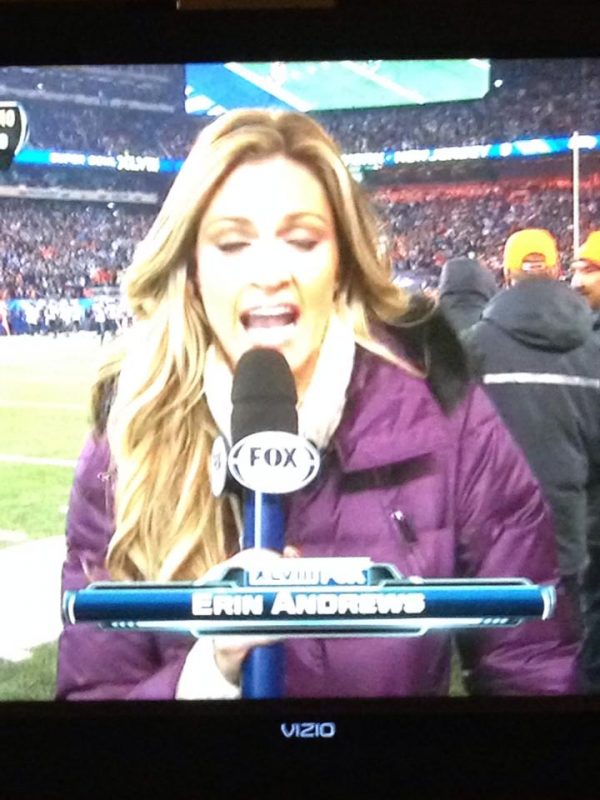 Yesterday’s Super Bowl was entertaining on a few levels.  First, thanks to my brother-in-law for pointing out how phallic the microphone sideline reporter Erin Andrews was using and posting this pic to Facebook.  As a former audio engineer and recording studio owner, I’ve never seen a microphone windscreen shaped like that.  Great joke by the Fox audio crew.  Nicely played Fox Sports!

Sometimes my golf game is like the performance the Denver Broncos put on Sunday. From their first snap, which went over Peyton Manning’s head and eventually ended up as a safety for the Seattle Seahawks, Denver was far from on their A game.  I looked at it like shanking the first shot out of bounds in a big tournament and never recovering.

What is the golf equivalent to the Denver Broncos performance in the Super Bowl?

The responses are quite entertaining:

Brian Remsberg ‏@BRGolfer
Bubba missing a 3 ftr AFTER blowing lead? “@TheGolfSpace: What is the golf equivalent to the Denver Broncos performance in the Super Bowl?”

George Sealy
Well I thought that the Shark pretty much caved in that Masters that Faldo won.

Chris AdamsYesterday
Calcavechia at the War by the shore,91 ryder cup

John Retzer Or Kevin Na’s 16 out of the woods at the Valero?

John F Duval
That would be like Tiger shooting a pair of 80s at Augusta to miss the cut.

John Retzer
A little more research: Tommy Armour made a 23 on a par-5 at the 1927 Shawnee Open.

The most popular analogy seemed to be Van De Velde’s meltdown in the British Open at Carnoustie.  Not sure that’s the best analogy as he blew the lead and should have won.  Denver never seemed to get off the tee and never had the lead.

Feel free to continue the conversation by commenting here or on the social networks lined above!