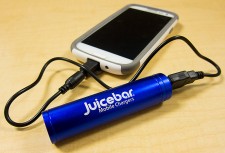 On the 17th tee the other day, my phone died.  That’s not cool.  It was not only serving as a phone at the time, but was also my golf GPS and golf score keeper.  The reason it died?  I’d been GPSing for 16 holes, Tweeting/Facebooking/Google+ing pictures from the course, and texting my pals who weren’t lucky enough to be on the course.

My old iPhone was especially bad in GPS mode.  I couldn’t get even nine holes of full GPS tracking before the battery died.  Fortunately my Samsung Galaxy SIII is better, but I still have to worry if I don’t get to the course with a full charge.

Almost on cue, a Juicebar arrived.  Juicebar is a compact mobile charger which can charge all sorts of mobile phones, tablets, and any other gadget like dedicated golf GPS devices.  It uses a USB connection and comes with adapters for all sorts of devices.

The Juicebar is capable of storing enough energy to fully charge a mobile device from dead to 100%.

I keep my Juicebar ready to rock in my golf bag.  On that occasion when my phone is dying on the course for whatever reason, I plug in the Juicebar and have enough power to last the rest of the round and the rest of the day.

Having a Juicebar on hand is a very good idea in case of emergency.  Say you’re out hiking, skiing, and something happens?  Nice to have a full extra charge just in case.  The unit is small enough to put in a backpack, golf bag, purse, glove compartment.

At about $28 the Juicebar has already paid for itself.  In situations where I need to charge my phone but I’m away from a wall plug or on the move, this device is a lifesaver.

One response to “Juicebar Mobile Charger”