Hot or Not? Female Streaker at Presidents Cup

I’ll admit I didn’t watch any of the Presidents Cup.  The International team has only won the event once since the tournament began clear back in 1994.  Sadly I missed a couple of cool happenings like the ace by Rookie of the Year Jordan Spieth, the squirrel incident where Lindsey Vonn put a squirrel on Tiger Woods…  But the thing I’m ticked I missed the most is the female streaker.  Apparently she came out in an American flag.  A cop tried to chase her down but lasted about 10 steps according to Steve Stricker. 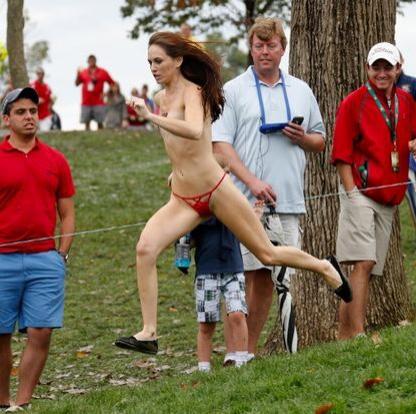 She’s not naked, so not sure if she counts as a real streaker.

She could use better shoes.

5 responses to “Hot or Not? Female Streaker at Presidents Cup”