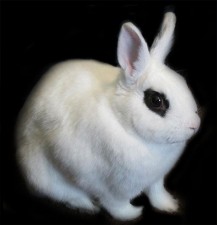 Yesterday’s league nine was triumphant.  I won TWO rabbits and a nice little pile of cash.  That made me want to share the “Rabbit” game with you loyal HOG patrons.  The rabbit game is quite fun.  Here’s how it works.

The goal of the golf rabbit game is to “capture” the rabbit, and $2 from every player in the group participating in the game.  Any number of players can compete, even players in multiple groups.  A player can capture the rabbit in one of two ways, by either acquiring four rabbit legs in nine holes or being in possession of any legs at the end of nine.  To capture a leg of the rabbit, a player must make a skin.  Once the player has a leg, he keeps the leg unless a player gets a skin on a following hole.  Then the rabbit leg is knocked loose.   Let’s take a look at my two rabbits from yesterday and how they were won.

When the rabbit is closed out before the nine is complete, a new rabbit is started.  I made a triple on the 8th hole and a few players made par.  No birdies.  So the 8th hole was tied with no skins.  No rabbit legs awarded.  On the 9th hole, a par-3, I hit one to about 12 feet.  I made the birdie putt for a skin and yes, a rabbit leg.  Since I had one leg at the conclusion of the 9th, I won yet another rabbit!  Piles o’ cash!

That was the end of our rabbit game as the group was only playing nine holes.

If the group is playing 18 holes, a new rabbit is started on the 10th and the game proceeds as described above.  If a player wins a rabbit on the front nine AND the back nine, a bonus is paid.  In the case of our group, the rabbit bonus is $1.00 bringing the total for a player who wins the front and back rabbit to $5.00 from each player.

Imagine a group of 20 players competing in the rabbit game.  A player who wins a rabbit on the front and back would win nearly $100 with the bonus.