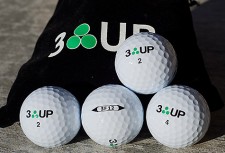 I had a hell of a round going yesterday.  Made eagle on the par-5 first hole with a solid 4-iron to about eight feet.  Made the putt.  Five pars and then a solid 6-iron to about 10 feet on the par-3 6th from 185 yards, birdie.  After par on #7 I was three under.  Then I completely gagged, going bogey-triple bogey on the last two holes of the front nine.  I bounced back great on the back nine with birdies on #10 and #12.  I ended up shooting even par on the back and a +1 73 for the round, despite having a triple bogey and a few bogeys.

The great shots I hit during yesterday’s round wouldn’t have been possible with a low quality golf ball.  That uphill 4-iron on the first hole from 195 or that great 6-iron which hit pin-high from 185 and stuck right there would not have been possible with a “distance” or non “tour” spin ball.   Was I playing a Titleist ProV1?  Perhaps a Srixon Z-Star or Bridgestone B330?  Nope.  I was playing a ball you may have never heard of, until now.

3UP is a new kid on the golf ball block.  They’re elbowing their way into a market ruled by billion dollar companies.  The company was founded by Rob Zimmerman, a 2 handicap.  Zimmerman survived a mild heart attack in 2012 and decided to take on a new path with his new lease on life, making golf balls.  Fast forward a year and lowly TK here is playing a very fine golf ball.  Let’s take a look at the 3UP 3F12.

The 3UP 3F12 golf ball was built with a little bit of old school balata spin and new school distance.  For those who don’t remember the balata days, balata golf balls were very soft and had extremely high spin rates, much higher than what we see these days.  That high spin was great on short irons and short game, but made driving the ball straight extremely difficult.  The covers on balata balls were so soft that a bladed iron could literally cut through.  The ball would be cut open, egg shaped and completely unplayable.

The distance of the golf ball is comparable to any big name golf ball on the market.  I’ve hit some cracking drives with the 3UP, like the drive on #18 yesterday.   #18 was a 470 yard par-4.  I was 145 from the pin for my 2nd shot.  You do the math.  The 3UP ball produces low side spin off of driver shots, which makes it more accurate and long.

So what makes the ball produce such great spin on the short irons, yet great distance off the driver?  The ball is a 3-piece (in other words 3-layer) ball.

The outer layer is a cast urethane, the same material most high end “tour” balls has.  This layer is where the “feel” in the short game and putting comes from.  318 dimples are aerodynamically designed to give the ball the proper amount of lift and carry.

The middle layer is called the “mantle” layer.  The mantle layer is made from an ionomer plastic.  This layer helps to reduce driver spin, yet doesn’t compromise shorter iron spin.

The center layer is, you guessed it, the core.  Just like the earth’s layers!  The core is the primary layer for distance.

I couldn’t wait to tell some 3UP stories from on the course, which I did in the intro.  I have many more, like the 7-iron I backed up on the 4th hole at River Oaks, with a tail wind.  Not possible with other golf balls!

I gave some 3UPs to a friend Kevin, a mid-teen handicap on the rise.  He loved the feel and was gushing to me about how he hadn’t been able to get that kind of spin from other big name golf balls.  I watched him produce several shots, even from the rough, which bit and held greens he normally wouldn’t have been able to hold.  Sold.

I’m very impressed with the durability of this ball.  Typically high spin balls are not durable.  In the photo to the right, check out my 3UP ball after 45 holes.  There are just a couple of scratches from some square grooved wedges, but the ball is nearly like new.

This is really awesome.  3UP will donate $3 to charity from every dozen balls sold.  That’s fantastic.  Don’t worry about losing a golf ball!  You just donated to charity!

While I love this golf ball, I think it will be a tough go to break into a market which has some very big names with multi-million dollar advertising and PR budgets.  Maybe this small article will help a bit.  I do think that at a retail of $39, a ball someone isn’t familiar with might be a tough sell.  I think pricing under $30, even $24.99 would be a better price point.

I like this.  A dozen 3UP golf balls does not come in a cardboard box, with four cardboard boxes inside.  Instead, the balls come in a nice bag/pouch with a tie string.  When you’re done with the balls, you have a great golf accessory bag to put tees and ball markers in!

Hats off to Rob and 3UP.  The ball is everything they say it is.  The spin in the short game is stellar and the ball is plenty long.