Shaking Off the Spring Rust, Looking Forward to a Big Summer of Golf 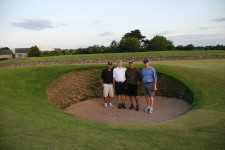 Heading to the Home of Golf AGAIN!

It has been a while since I posted an update of my game here.  So many reviews and other stuff to write about.  But one of the reasons I started this blog was to chronicle my own journey on the course.

Golf here in Utah can be frustrating.  Yes this place is beautiful with some of the best golf courses and best pricing of golf anywhere.  But we have long winters, forcing us golfers to go into hibernation unless we travel.  This winter was tough.  Didn’t play more than four rounds, cold ones at that, between December and March.  When I don’t play regularly, at least a couple of times per week or more, my game starts to fade away.  The first thing that goes is my short game, followed by my irons and ball striking.  My driving and putting seem to weather well as those are the two parts of my game which seem to come natural for me.

I’ve got a much busier schedule this year than ever before.  Between a new day gig and 3-4 golf writing gigs, finding time to golf or practice is tough.  I have been playing quite a bit the last few weeks though and the rust is finally, slowly, coming off.  Yesterday I practiced short game for an hour, which was very beneficial.  My save percentage, getting up and down for par when not hitting a green in regulation, was awful at the beginning of the year.  I’m talking 20% or less.  That number is improving.  Just yesterday I missed a ton of greens but thanks to decent chipping and great putting I managed an even-par round which included my 2nd eagle of the season via chip-in.  That’s evidence right there that when the short game is working, the scores are low.

June is going to be a huge golf month for me.  As of this moment I count five state sanctioned tournaments on my schedule, along with my regular leagues.  One is my favorite, the Salt Lake Amateur, a two-day tourney held at one of my home courses, Bonneville.  This tournament is the one I want to perform in the most.  The pressure is high.  The last two years I’ve made it into the money, which had been a goal for years.  Winning the thing is not likely as I’m playing against the college scholarship players, but you never know.

Also in June I’m playing in the Wingpointe Amateur for the 2nd time in my very modest amateur golf career.  There are some serious players in this tournament.  I usually play that course well so I have high hopes.

Later in June I’m playing with my pops in his club’s father/son tournament.  We are defending CHAMPIONS.  I’m not planning on giving up that claim this year either. 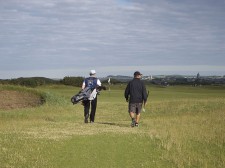 My pal Boynie (left) and myself at the Home of Golf

All the tournaments and golf in June will be a great primer to July.  On June 30 my clubs and I jump on a plane to Philadelphia.  I have a four hour layover in the Philly airport where I’ll be joined by my best friend in the world.  We will be flying to Scotland and making our second trip to the Home of Golf, St. Andrews.  We’ll be joined by two other very good pals for a week of golf.  Very much looking forward to that.  By then my game should be in pretty good shape.  I’m looking to better my low score on the Old Course, a 77.  I’m also looking forward to catching back up with my good friend and Old Course caddie John Boyne (pictured right).

This summer is going to be a good one.  Looking forward to playing some good golf, making a lot of birdies, but most of all enjoying it with the fine gentlemen I share the game with.

One response to “Shaking Off the Spring Rust, Looking Forward to a Big Summer of Golf”

PREVIOUS POST
Golf on TV This Week
NEXT POST
Fan Mail Gone Bad - a.k.a. What One Can Tell About a Golfer by the Golf Bag He Uses