This spring has been fun, including testing out the new Nike 20XI and 20XI-X golf balls.  The XI version is the spin/control model while the XI-X is the distance model.  Today’s review is specifically the XI-X model.  I’ll be posting my XI review soon. 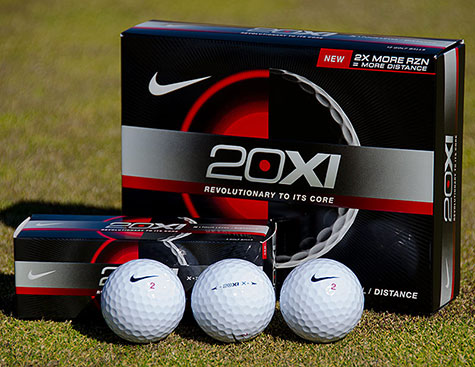 The 20XI X golf ball is a four layer golf ball.  Typically, the more layers, the better the ball.  Some layers in the 20XI series are made of a different material than the same layers in other golf balls.  At the core of Nike’s technology, pun intended, is Nike’s “RZN,” a rubber material which makes up the ball’s core.  The mantle layer, (think back to the time you learned about the earth’s layers), is also made of RZN.  The large RZN core and mantle maximize distance and improve accuracy.

The cover of the ball is the same material as most high performance balls, urethane.  The urethane layer is what gives the player spin and control, especially in the short game as well as a soft feel on the putting green.

From the first time I put these balls into play the distance gain was substantial.  I have gained some distance this year through new equipment and a few more pounds of weight gain, and the XI X made it even more massive.  Where I was even or perhaps 10 yards ahead of some of my opponents, I’m now some 30-50 yards ahead.  Hitting a wedge to the green is a little better than hitting a 6-iron.

The urethane Nike uses in the covers must be on steroids or something.  The 20XI series is far more durable than any other premium golf ball I’ve tested.  I can play 18 holes with an XI or XI X and the cover still looks brand new.  Not the case with other urethane cover balls, which show scuffs and scrapes from my wedges.

The original models of the 20XI series felt quite hard.  Too hard for my taste.  Nike has certainly improved the feel of the new 20XI and XI X golf balls.  They are noticeably softer, though still hard feeling in comparison to balls with non-RZN cores.  Some players may prefer that hot and hard feel off the driver.  Some may not.

Nike’s new RZN technology in the 20XI models is progressing very well.  Each year the feel, performance and quality gets better and better.