Today I’m reviewing a very interesting golf ball series from a company called Polara.  The Polara golf ball is unique in that its dimple pattern is designed to reduce side-spin.  Side-spin is what causes the golf ball to curve off line, either hooking or slicing, drawing or fading.  Polara has four models in this self-correcting ball series, the XD Extra Distance, XDS Extra Distance & Spin, Ultimate Straight and Ultimate Straight XS. 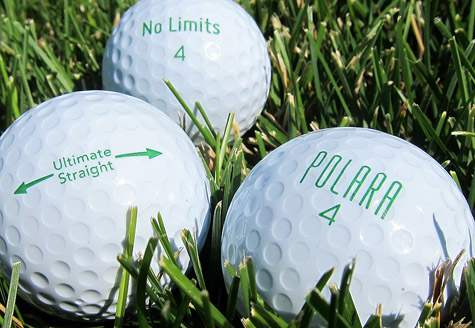 Before I go any farther with my evaluation I should clarify that this ball does not conform to USGA or R&A rules.  It is not legal to play this in an official handicap round or tournament.  Being legal is not the point for Polara.  The point is keeping the ball in play and increasing the FUN a player experiences in a casual round of golf.

As mentioned, Polara’s dimple patterns reduce hooks and slices between 50%-75%, depending on the model.  The XD and XDS are 50% correction and the Ultimate Straight series is 75% correction.

When playing the ball, the player needs to align the arrows on the ball toward the target.  See the arrows in the first image.  That gets the dimples and weighting of the ball aligned properly.

I had a buddy of mine, Dan, try the Polaras with me.  I don’t think Dan has ever hit a draw in his life.  He has a standard fade which sometimes gets out of control and turns into a slice.  Dan is perfect for testing a ball like this.  I played some shots on the course too, though I don’t hook or slice.  I typically hit the ball very straight.

Our results were quite dramatic.  As promised the Polara balls flew straighter.  We hit every fairway with the Polaras, while some of our premium “tour” ball results were missed fairways or worse (hazard in my case).  But more amazing to me was the distance gain I experienced.  I found a 25 yard gain at the minimum with the Polaras and some were as much as 40-50 yards longer.

Here are some video highlights of our testing.  Apologies for the wind.  In fact, that is worth mentioning.  You can hear how strong the wind is in this video below, yet the Polara still flew dead straight and long for me.

Priced at $35 retail per dozen, these balls could make the game more fun for players who aren’t posting handicap or tournament scores.  I can’t honestly say I’ll be putting them in play, because I record every score I post for my handicap religiously.  I might just keep some handy for the day I get invited to a “hit and giggle” corporate or charity scramble so I can get that extra 50 yards!