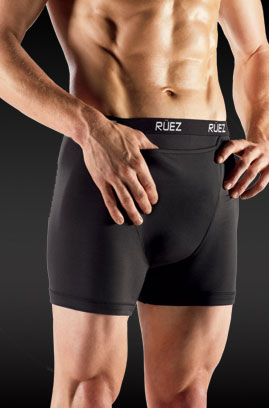 I swear this guy stuffed his performance pouch…

I had a hard time explaining to my 78 year old neighbor lady what I was doing in the back yard.  I was taking pictures of myself, in my undies.  The lighting is so much better outside.  Her yelping mutt sure got all riled up.  Ever since that day she stopped bringing her tasty homemade cupcakes over.  Not sure why.

I had an equally difficult time trying to explain to the wife what I was doing when she walked in on me editing said photos in Photoshop.  “What the hell are you doing?” she asked.  “I’m editing photos of my performance pouch,” I responded.  That quick and confusing response was enough to stop her dead in her tracks…

So what is Ruez Performance Underwear and how can it help my golf game?  Let’s look at some of the features these undies have.

First and foremost, Ruez’s undies employ a design called a performance pouch.  The performance pouch is designed to separate the golf club from the golf balls, if you know what I mean.  This is done with a couple of layers of fabric, with a hole on the closest layer for putting the male organ through.  Keeping the performance package (also known as “sparky”) separated from the body helps “bring a clever, comfortable end to chafing, sweating and adjusting.”  Here’s what the Ruez web site says about it:

“This innovative underwear solution is designed to separate and protect male organs during performance events including running, cycling, triathlons, Ironman and more.”

“RUEZ is designed with an innovative Performance Pouch that separates and protects men’s body parts during high-endurance but are comfortable enough to be worn all day.”

A 2nd pocket in the shorts, the personal pocket, is designed to keep valuables close and under gym shorts so they don’t fall out during a workout.

The undies are made of an 85% polyester material which is moisture wicking, with 15% elasticity for a little compression.

Ruez Performance Underwear comes in black and is available in two styles: Boxer and Brief.

All the talk about performance pouches and such is great around the coffee table, but do these undies really do what they say?  I’ve played some test rounds here in temperatures between 90-104 and here are my personal conclusions.  I’m sure other men’s results may vary as much as their private parts vary…

In the more information than you need to know category, I’m a boxer kind of guy.  I don’t have any tighty-whities in the drawer.  So naturally I tested out the boxer version (first image) first.  These boxers though, have a tight fit around my muscular Greek thighs.  So muscular…  I didn’t like that at first.  I’m used to loose boxers.  But as the day and the golf round wore on, I began to like the feel of the compression on my gluteus maximus and especially my hamstrings.

It is tough to concentrate on golf shots, and even tougher when you’re pondering how and why your performance package moves around and varies in size so much, and having to “move the couch into the corner.”  In the end, the boxers were a no-go.  Too much fidgeting.  Just hope the neighbor lady didn’t see that too…

I wasn’t terribly excited (no pun intended) to put the Ruez briefs in play so I put it off for a while.  Based on the boxer experience I was expecting another day of fidgeting and “performance package pondering” on the course.  I put the briefs on in the morning, put the performance package into the performance pouch and got dressed.  From that point on, I was very surprised to find that the sparky was cooperating.  No movement.  No repositioning.  No distractions.

Yesterday, with the briefs in play, was very hot and humid.  It was so hot that my hat was soaked and I had to put on a golf glove.  I never wear golf gloves unless my hands are so sweaty that I can’t keep a good grip on the club.  I’m happy to report that the performance pouch seemed to do a good job.  No swamp crotch, which is always good.

My conclusion is a bit of good and bad.  The boxers didn’t work, but the briefs did.  On the boxers, it could be a size issue or perhaps the design/cut just doesn’t line up with my anatomy.  But as I mentioned, I did like the compression of the boxers on the hammies.

The briefs did deliver as promised and made a believer out of me.