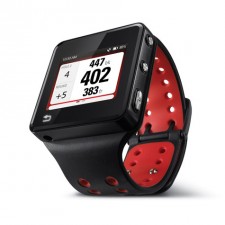 This review may be a bit long. The MOTOACTV has a lot of features to cover and I have a lot of comments and critiques about the unit.  First lets discuss what this device is and does.

What Is The MOTOACTV?

The MOTOACTV is made by Motorola.  It is an electronic device which is about the same footprint as an iPod Nano, about 1.5 inches square and 1/2 and inch thick.  The unit has a touch style interface and color screen.

There’s a wrist band (first image) which the unit mounts onto so it is like a watch.  A mounting clip is good for attaching the unit to your shirt or pants or like I do, my belt loop (pictured below, and yes it is upside down but when you look at it from above it is not!).

Also included with the unit is a USB wall charger and USB sync cable.  The wall charger is great, with two powered USB ports. I can charge the MOTOACTV and other devices with it at the same time.

Below I’m going to comment on the unit’s features and how they worked for me.

I like to take walks in the evening with the lovely lass.  We can now track our distance traveled, elevation change and calories burned on our evening walks.  I have yet to take the unit hiking, but when I do I’ll be very interested to see the elevation change on display on my computer screen.  Very neat stuff.

I’ve been using the MOTOACTV at the gym for about 10 sessions now.  The unit has default settings to track walking, step machines, elliptical machines, cycling, golf and running.  There are three configurable “custom” activities which include everything from aerobics to yoga, badminton to yard work.

I have yet to pick up a heart rate monitor.  When setup with the MOTO, it would allow the unit to track my fitness much better.  For instance, while on a treadmill the unit doesn’t know if I’m on an incline.  So the MOTOACTV will say I burned 300 calories when I actually burned 450 due to the incline.

As a music player alone, the MOTOACTV is great.  I’ve synced all of my music from my Mac on iTunes easily with the included Motocast software.  Before I did that I simply dragged the music files from my hard drive into the music folder on the unit with my computer.  Both worked great.

The footprint of the unit when not on the wrist mount is tiny.  I now don’t have my bulky iPhone bouncing around my pocket when I’m at the gym, which is much better.

I’m not sure if there is golf golf GPS any smaller than this.  That’s one hangup I’ve had with golf GPS units.  The MOTO is so small you can just carry it in your pocket or use the attached clip to attach it to your shirt, pants or my favorite place, my belt loop.

The GPS yardages are accurate and very quick.  Some GPS units seem to take a long time to come up with numbers when  you are on the move.

When the unit syncs the data to the Motocast web site, you can look at some cool GPS data.  I particularly like seeing a line showing all the places I was on the course.  The graph showing elevation changes is fantastic.  Would love to see that graph at Augusta National!

I have some critiques about the golf GPS. Read below under the critiques section.

When playing a round of golf scoring can be done a couple of different ways, which are configured in the settings section.

The first scoring system is simple.  You enter in the number of putts on the hole, and the hole total score.  Works great.

The second scoring system allows the player to mark GPS locations of each shot on the course.  This is very cool when you dump the data into the computer.  BUT it is very difficult to remember to click that button every time you get to your ball.  The result then is incorrect or incomplete data.

Once again, check for my critiques below.

When setting up the unit, a player can select the clubs in his/her bag and the distances they typically go.  During the round, the unit will make club suggestions based on the yardage.

When your round is done and the unit has synced the data to the mother ship there are some very cool views.  You can see a graph of “metrics” including calories burned, elevation, distance, speed.  Three of the metrics can be overlapped in the graph view as seen in the image below.

Below the graph view is a map view.  This is one of the mega-cool features of the system.  You can literally see your entire path traveled during the round, or the locations of the shots when you mark GPS ball locations.  VERY cool feature.

Miscellaneous information is also logged and/or displayed such as weather conditions during the round, workout intensity level and journal notes.

I’ll first preface this section by saying that this unit is one of the coolest and most innovative devices ever to hit the golf world.

As new as this device is and given how many features it has, there are sure to be glitches and bugs.  The nice thing to know is that most of my complaints/bugs can be resolved because all they’ll need is a software update.

Here is a list of bugs or missing features which need to be resolved.

I’m sure with such a new product and new golf features, the MOTOCAST team is working hard to resolve the bugs.  I hope my “constructive criticism” helps them get it done faster and easier.

Rants/bugs aside, the MOTOACTV is a great tool for fitness, golf and music.  The footprint is tiny.  I can’t wait for the bugs to be ironed out because I will use the unit regularly on the course, outside and in the gym.