An “anonymous tipster” texted me this photo from his/her iPhone.  This is a local driving range and course I frequent.

In the photo, if you couldn’t tell, is Mike Weir.  He’s working on his game for the Masters next week.

Round One Of Shell Houston Open Resumes

Yesterday’s first round of the PGA Tour’s Shell Houston Open was delayed due to bad weather.

The first round is back underway now (Friday morning) and about half the field has completed the first round.  Carl Pettersson and Angel Cabrera (on my fantasy team) are in the lead so far at -7 but it is way early.  Keegan Bradley finished at -5, two shots back. Phil Mickelson is also two back, but still has seven more holes to play.

Scores should be even lower today as the course will be softer because of the rain.

TV coverage today is from 3-6PM ET on Golf Channel. 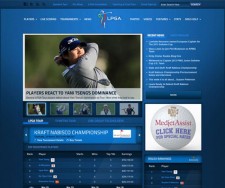 I’ll admit that when I surfed to the LPGA website I kept a barf bag handy.  The layout/design was less than stellar.  Probably the most irritating thing was trying to look at their season schedule.  Blech.

I make a stop there this morning to do a little read on the Kraft Nabisco Championship and to my pleasant surprise the web site looks fantastic now!  As a bonus, the schedule format is vastly improved.

Well played LPGA Tour. Now if we can just get you to get rid of the awful new LPGA logo we’ll be in great shape.

Who are we kidding right? THE MASTERS IS NEXT WEEK!!! Can’t wait.  But we have to get through this week first.  The Shell Houston Open is this week and there are a few players like Phil Mickelson who like to use this event as a warmup for the Masters. A few other notables in the field this week include Fred Couples and Charl Schwartzel. In fact, those three I mentioned are this week’s featured group.  Others to keep an eye on include my favorite rookie Bud Cauley, Lee Westwood, Keegan Bradley, Graeme McDowell and the living traffic cone Rickie Fowler.

The following prizes will be awarded for EACH of the four major championships in golf this year:

1. Go to http://www.buzzfantasyleagues.com
2. Create an account if you don’t have one
3. Click on “Join Existing Private League”
4. Enter League ID 233, and Season ID 206
5. Create your team, enter league password “HOG”