Today was my regular Thursday money game.  It is a grudge match which has been going on for years.  Some days I’m on the winning end, some days not.  Today’s conditions were extremely windy.  I’d hoped to get to the course about 30-45 minutes early to test out the new clubs from Bridgestone Golf which I mentioned last night.  I had a J40 445 driver, J40 3+ fairway wood and some J40 Dual Pocket Cavity Irons.  Unfortunately some heavy traffic ate up my range time and I had to head straight to the first tee with no warmup and a stiff back.

I decided not to put the clubs directly in my bag.  If they didn’t fit my swing or I wasn’t used to them, it could be a costly mistake. 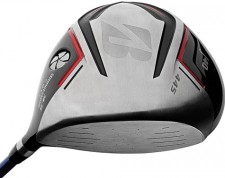 I hit a few practice drivers after my regular drives (time permitting).  On the first drive I hit the right rough which killed a little of distance before ending up in the fairway with a little draw.  So that drive was about 10 yards behind my regular driver, which hit the fairway on the fly.  The next drive though, was on the par-5 5th.  I absolutely crushed the J40, knocking it about 25 yards longer than my regular driver.  But I must mention that the regular driver caught the left rough.

I let my two buddies hit the driver today as well.  They both commented on how nice it looks from the top line and how nice it feels when you hit it.

Now onto the 3-wood.  I always tee off with a 3-wood on the 7th hole at the course we played today.  The tree lined hole is tight and calls for a draw, but there’s OB left.  I hit my regular 3-wood perfectly down the middle with a little draw, just like I described.  So I pulled the J40 3-wood for a comparison shot.  I used the same B330-RX ball, though the first was yellow and the 2nd was white.  The ball seemed to come off the club at a much faster speed.  I hit this one perfect, also with a little draw.  The tee mark was dead center on the club bottom, going straight back.  When I got up to the two shots in the middle of the fairway I walked the distance between the two.  The J40 3+ was 16 yards longer than my regular 3-wood.

Later on the par-5 17th hole I pushed my drive into the right rough.  The ball was not sitting terribly high and normally I wouldn’t try to hit a 3-wood.  But since the hole was likely a three shot proposition and I could afford a miss-hit, I gave the J40 3+ a shot.  I crushed it, with a draw.  I looked at my opponent, and he looked at me with a look of bewilderment and awe.  I was nearly to the green.  I’d made amazingly good contact from the rough.

At that point I knew my old 3-wood would be celebrating an early retirement and spending some relaxing days in the garage from this point on.  The J40 3+ fairway is going straight into my starting lineup.  My quest for the holy grail of 3-woods may be over.

I only hurriedly hit one J40 Dual Pocket Iron test shot, and not well.  The group behind us was close and I didn’t want to hold up play.  First impressions though, are that the clubs are very solid.  My other opponent hit a few test shots today and loved them.