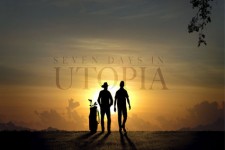 I was pleasantly surprised to hear early this year that the golf novel Golf’s Sacred Journey was being made into a movie.  I did enjoy the book, one of the few golf novels I’ve read in the last decade or so.  I wondered if the film would end in the same strange way that the book did.  You’ll have to watch it to find out and now you can since the movie Seven Days In Utopia opens in theaters today.

Without giving away what happens, the story line is one of the classic lines used in several golf novels which I break down in three bullets:

There are two primary characters in the film, Luke Chisholm and Johnny Crawford.  The player who lost his game is Luke Chisholm, played by the actor Lucas Black.  Luke/Lucas.  What a coincidence.  Lucas Black does a fine job in this flick selling the struggling tour player and Lucas’s golf swing is quite decent, unlike many golf movies where it is obvious that the “star golfer” of the film had never touched a club until he started shooting the movie.

The zen golf guru Johnny Crawford is played by my new buddy Robert Duvall.  Robert Duvall is a fantastic actor who has played some amazing parts in huge movies like The Godfather, Apocalypse Now etc.  Duvall has had six Oscar nominations and won one for his leading role in Tender Mercies back in 1983.

A few PGA Tour players made appearances in the film including Stewart Cink, Rickie Fowler, Rich Beem and one of my favorites K.J. Choi.  Choi played the intimidating pro golfer “Tae Kwon Oh.”  I’ve been trying to get some interview questions to Choi so stay tuned on that.

Some Golf Channel personalities also appear in the film.

This movie is a G rated movie with a capital G and has strong Christian overtones.  I don’t think I’ve watched a G rated movie in 15 years.  The film definitely earns that rating as there is absolutely no violence, no sex, no guns, no explosions and not one swear word spoken.

I had the great pleasure of interviewing Robert Duvall about the movie this past week.  We even talked about other things like Jack Nicklaus and college football.  Check it out:

As mentioned, Lucas Black sells the part quite well and his golf swing was very solid and believable.  He has a bit of a low finish which reminds me of Matt Kuchar’s.  He interacts quite well with Robert Duvall who also did a great job in his part as Johnny Crawford.  Any of the scenes with Deborah Ann Woll were good, just because she’s so stunningly pretty with those eyes.

The soundtrack was surprisingly good and I liked how some of the cool extra effects on the golf swings and shots accentuated what was happening.

Given that the movie is obviously not a super high budget, and the fact that it is a very white bread (as Robert Duvall described it) story, I thought it was well done.

The Callaway Golf product placements are a bit over the top.

I would have loved to see some of the characters developed more.  Johnny Crawford’s character had a lot of room for development but there were only a few hints of his past troubles.  It would have also been better to nail Crawford’s zen magic more and give him more mystique.  The novel seemed to do that better than the film.

The relationship between Chisholm and Sarah isn’t developed at all.  I know the film wasn’t a love story, but that aspect would have been good to explore.

This film is not the next Titanic or anything like that.  It is obviously not the next high budget blockbuster which will sweep the academy awards.  Golf movies just don’t do that.  And golf movies are usually strongly criticized by most film critics.

I think most golfers will enjoy the movie, and non golfers may be left a little hungry for character development, drama and a little love affair twist.