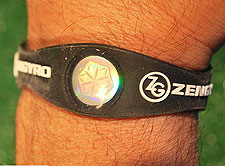 I’ve been evaluating some golf energy bands for the last few dozen rounds of golf, one of which is a ZENGYRO.  This band is a hologram based energy band which is supposed to counteract the many electrical fields, like from cell phones, which upset the human body’s natural electrical balance.  At least they didn’t promise that it would add 20 yards of driving distance and 43% more accuracy.

As mentioned, the ZENGYRO is designed to counteract electromagnetic fields which have a negative effect on the body.  The bracelet, with its three holograms stores positive frequencies and “reminds” the body of the proper frequencies.

I’m No Physicist But…

The above statements may or may not be true. If they are, they forgot to mention that there may be some additive and subtractive synthesis going on. They’re only talking about whether complete cancellation does or does not occur.  In physics two waves which are not completely out of phase may interact with each other in a positive or negative fashion.  Imagine a wave in the ocean moving along, and you jump into the wave.  The wave created from you jumping into the water adds to the other wave, creating a larger wave.

I’m a skeptic.  I’m not really sure I believe that the hologram is storing good frequencies and telling my body to ignore the bad ones.  I’m not sure about the technology but I do have some coincidences to mention which might convert me.

Since putting the ZENGYRO on my left wrist, my golfer’s elbow and tennis elbow are gone. Major bonus.  Is it the hologram doing that?  Maybe.  Perhaps it is just having something on my wrist?  Not sure, but I’m not going to take the chance of playing without the ZENGYRO for a while.

I started wearing the ZENGYRO back before the predicted and widely publicized end of the earth.  I can safely say that since putting this energy bracelet on my wrist, the earth hasn’t been destroyed and the human race hasn’t come to an end.  Since I’ve been wearing this thing, no alien species has invaded our planet and eradicated the human race.  Based on that info alone, it seems that it would be a really good idea to keep wearing the ZENGYRO.