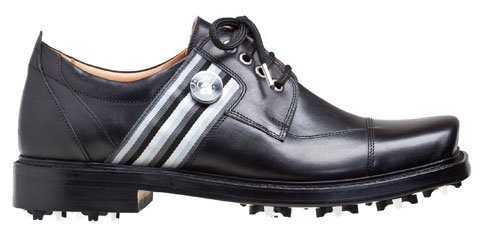 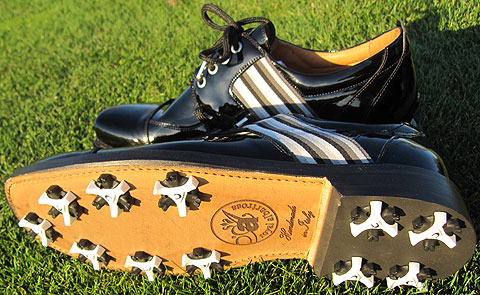 Had I had my new Royal Albartross patent leather golf shoes when I tied the knot back on May 22 of this year, I would have discarded the rental shoes from Men’s Wearhouse which came with my tuxedo, and replaced them with my Black Jack Neros.  They’re by far the nicest shoes I own and about as comfortable as my Vans.

Before I do a review of a product, I put it to task in the real world of the golf course and the trunk of my car.  When I’ve spent enough time evaluating the product first hand, I jump online and do some research about the company, the technology and whatever else I can find.  I was checking out some of the high end media outlets which have covered Royal Albatross’ golf shoes, when I came across a video which had a familiar voice in it, mine.

Yes one of the review sites had actually posted a video I shot back at the 2008 PGA Show, when I interviewed the fine lady Alex Bartholomew from Royal Albatross during their USA debut.  Alex did great in the interview, but I must admit that I sounded like I’d been up the night before having adult beverages and fine cigars ’til the wee hours of the night with fellow golf industry professionals and crazy PGA Tour caddies.  I sounded that way because that was in fact the case.

Interestingly enough, the pair of shoes Alex chose to show during the 2008 interview, I’d be wearing 2.5 years later and shooting a 70 (-2) to destroy my opponents and win enough on the course that day to pay for 1/4 of the retail price of these babies…

Royal Albatross is a UK based manufacturer of fine leather golf shoes which are hand made in Italy.  It takes about 70 hours over an eight week period to make a pair of these shoes, using the finest materials which are hand picked from all over the world.

My Black Jack Nero golf shoes are so cool.  They’re shiny.  Get to know me for a few minutes and you know I love shiny things.

Not only are they shiny, but they’re very classy, especially with the square toes.  Square toed shoes have been the in style in high end apparel for quite a while now.

The right shoe dawns a magnetic ball marker which is a nice touch.  If you really want to impress your friends, you can get the ball marker in 24 carat gold.  Everyone needs a 24 carat gold ball marker on their handmade patent leather golf shoes, right?

The shoe is treated with “anti-microbial protection” to keep it fresh.

The lining of any Royal Albartross shoes are very soft and comfortable and have plenty of padding.  A nice touch is that there are no stitches in the lining, which makes them even more comfortable.

The sole is made out of water repellant leather and has seven Q-lok golf cleats.  The stacked leather heel has four more Q-loks for a total of 11 per shoe.  The Q-loks are great because they’re easy to take and out install, and quickly.

I was dreading the first round with my Neros, because I figured I’d end up with blisters as I broke them in.  By the 2nd hole I was noticing that the shoes weren’t rubbing anywhere and that they seemed to be intelligently molding themselves to my feet.  The comfort level of these shoes is as good as any I’ve worn, and they’re probably still not completely broken in.

The padding of the shoe really helps throughout the round, especially at the end.  After walking 18 holes with other more “dressy” golf shoes, my knees and back cam be sore and stiff.  The feet can hurt.  This is not the case with my Royal Albartross shoes.

I have a solid foundation and great traction when hitting shots.  As spastic as my swing can be sometimes, I need traction.  As I mentioned in opener option #1, I shot my best round of the year during that same first Black Jack Nero round.  The performance of the shoe is not compromised by the fancy looks.

I try to post critiques in all my reviews.  The only thing I can critique is the shoe bag which the Albartross shoes come with.  It would be great if the bag had a separator in the middle, so the shoes don’t scuff or scratch each other inside the bag.

If you’d spend $500 on a driver, why not pony up and get yourself a really great pair of golf shoes?  They’re one piece of gear you use on every shot, not just the golf ball like has been mentioned in a large golf company’s advertising campaign lately.

The Royal Albartross Black Jack Nero shoes are like no other I’ve seen on the course.  Their incredibly good looks and unique style are matched by their comfort and performance.