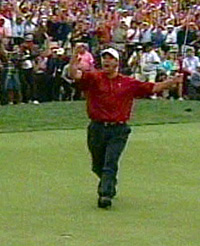 The U.S. won the President’s Cup yesterday with 18.5 points versus 15.5 for the International team. I was expecting to see a lackluster, uninspired appearance by the U.S. Team and I was happily surprised I didn’t. I could be one of the ones who expected the International team to lose handily without the help of Ernie Els but I knew they’d come well prepared and give the U.S. all they could handle.

The U.S. Team seemed to have a fire burning that I haven’t seen in several Ryder Cups and President’s Cups. Perhaps this fire finally came as a result of being slammed by the press and the fans for their previous appearances. Perhaps they just got tired of being beaten by relative no-name (certain players excluded) opponents. Maybe it is that captain Jack Nicklaus found a way of inspiring his team, or finally found teams that gelled.

Whatever the reason, I loved watching the intensity of the matches. Several players seemed to elevate their games to higher levels during this event like Mike Weir and Fred Couples. What is it with Freddy seeming to own Vijay in these events? That was fun to watch. Tiger seemed to have a bit more of the team mentality this time around as well, even though he lost his individual match to Goosen.

Clearly the big story of this President’s Cup is the performance of my newly named “Mr. Clutch” Chris DiMarco. DiMarco performed so well that captain Nicklaus picked him has the anchor player in the final match, rather than the seemingly standard pick Tiger Woods. How much does that tell you that Nicklaus put his faith in DiMarco as the anchor? The results showed that not only is Jack (my pal) smart, but DiMarco has some of the biggest golf balls out there.

DiMarco’s final match against the slow-playing ball-bomber Stuart Appleby, was some of the funnest and most intense golf I’ve watched. It was like watching two heavyweight boxers trade punches. But DiMarco was fighting out of his weight class and was outweighed by 50 yards off the tee.

Most the highlights have been showing the final clutch putt DiMarco made on the first sudden death hole to seal the victory. That’s great. But the shot DiMarco hit from a terrible stance in the bunker was the difference maker. That amazing shot from 180 yards is what gave him the chance to make that clutch putt. There was almost no way he should have been able to knock that shot close enough to make the winning putt but he did. Simply clutch.

For a guy who hasn’t actually won a tournament since the 2002 Phoenix Open, DiMarco has some major respect in the golf world. Deservedly so.

2 responses to “Thoughts about the U.S. President’s Cup Win”