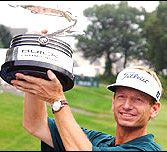 Brad Faxon fired a fabulous career low 61 in the final round today at the Buick Championship. That was only good enough to get him in into a tie for first with South Africa’s Tjaart van der Walt.

On the first and only playoff hole Faxon pulled his drive into the left fairway bunker and van der Walt launched one 300+ down the fairway. Advantage van der Walt? Nope. Faxon knocked an incredible bunker shot to within 2 feet of the hole. Not be be outdone, van der Walt nailed the flag on the fly with his approach shot. Tjaart was unable to convert his birdie allowing Faxon to win his first tournament since the 2001 Sony Open.

Though there was no Tiger, Phil or Vijay in this tournament, there was plenty of great golf to enjoy. Jason Gore didn’t necessarily provide any of that great golf, but he will soon.