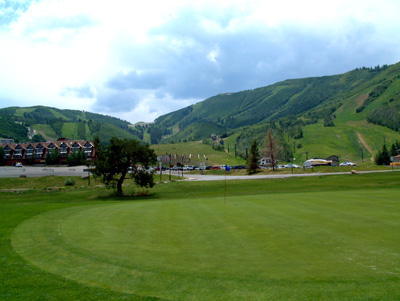 Played some golf in Park City, Utah this weekend. Park City is Utah’s version of Aspen, complete with the millionaires and overpriced tourist shops and restaurants. Tiger and Mark O’Meara even have homes there. Park City is most well known as a ski town and for the Sundance Film Festival. Park City also hosted many events in the 2002 Winter Olympic Games. I attended the long jump and the bobsled events.

But when the snow melts Park City is quite a nice place to visit as well. There are tons of mountains and trails for hiking and mountain biking. There are also a couple of golf courses right in town.

The top picture is of the 17th green at the Park City Municipal course. You can see the bottom of the chair lifts and ski runs which are part of the Park City Mountain Resort. The lighter colored line down the mountain is a slide you can ride called the “Alpine Slide.”

The Park City Municipal is a fairly short, traditional tree lined course. Tee accuracy is crucial. You could shoot a low number if you keep it in the fairway. Their range is terrible though. They have rubber mats and only allow shots of 215 yards or less.

The pic below is a shot from Park Meadows. 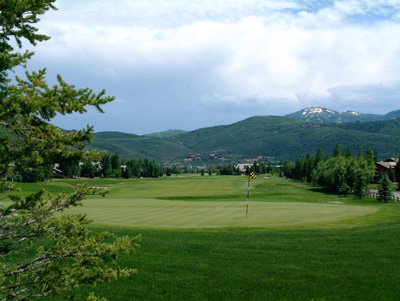 Park Meadows was once public but is now a private country club. PM was designed be the man himself, Jack Nicklaus. PM is a typical Jack design with lots of long holes, sand and fades off the tee. PM also hosted the then called Senior Tour and had the likes of Jack, Arnie, Gary, Lee, Chi Chi and more play there.

You can still see some snow atop the mountain in the background at the top of the ski resort.

One response to “Weekend in Park City”