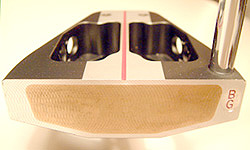 I’ve been in discussions with MacGregor Golf for a few months about doing some reviews of their gear. Finally they sent the first piece of gear for me to review: The Bobby Grace designed V-FOIL M5K-GT. I’ve been using this putter exclusively in my rounds (including tournaments) for about the last 3 weeks.

To be honest, the reason I was so intrigued by this putter is because it just looks cool. This is quite an engineering piece of art considering all of the individual components and the specialized construction of each. 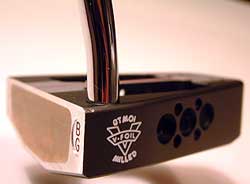 The putter head is milled from a solid block of aircraft aluminum. There are 150 grams of adjustable copper weighting in what they call the “Tri-Tech” adjustable weighting system. I didn’t get to play around with the adjustable weights however. The face of the putter has a forged Beryllium copper face insert. The insert and surrounding area on the face is milled in a circular pattern. This milling will prevent any slipping or sliding of the ball on the putter face.

You can’t have a club review without mentioning the buzz words “center of gravity.” You definitely know where the center of gravity is on this putter. It is directly behind the ball in the back of the head. MacGregor loves to talk about MOI or “moment of inertia.” Basically this is how they measure the putter’s ability to stay on path and reduce twisting at impact. With the very heavy center of gravity positioned far behind the ball, the MOI is extremely high. A high MOI results in the putter head physically staying on line even through impact. In English: The putter stays on line well, even on off center hits.

The grip: I seldom hear product reviews (especially putter reviews) that say much about the grip at all. Putting is so “feel” oriented the grip is very important. The grip on the V-FOIL M5K-GT is the Winn V17. This is a very nice feeling grip. It has some treads on it but they are not abrasive. It compresses just enough to feel like it has some cushion but it isn’t overly soft.

I also liked the screening they did on the upper shaft which says “MacGregor designed by Bobby Grace.” Someone could make a ton of dough using that technology to put custom text on clubs like names etc.

OK, enough nuts and bolts! How does this machine work on the course? All the technology in the world means nothing if it doesn’t work well on the course. 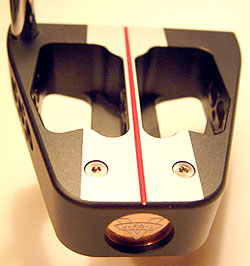 I usually place the ball in the center of my stance when putting. I found that with this configuration putter (the shaft was in the heel and not the center), I needed to put the ball forward in my stance. I got the feel that the putter face was pointing down when the ball was in the middle of my stance. That may have simply been an optical illusion due to the mass of the putter behind the ball. I also found myself distracted at first by the visual of seeing the ground through the bottom of the putter. After a few strokes that distraction was no longer an issue. I could have used a little thicker painted red center line speaking of visuals, but that was a minor item for me.

This is not the lightest putter in the world. You can’t get very “wristy” with this putter simply due to weighting. It is also hard to come off line unless your line is sideways to begin with. The best strokes I had with this putter were smooth strokes with nice rocking shoulders. If I got a little too quick on the stroke I would pull the putts. I found if I simply put a decent tempo stroke on the putt, the putter’s weighting and balance would do the rest. I really liked this putter on long putts. In fact I made an improbable eagle putt on the 14th hole last Thursday from about 70 feet. (My opponent had pressed on that hole!). I did find that I needed to grind a little more on the 3-5 foot range to assure a good line.

I found this to be an excellent putter in general and especially good on slow or bumpy greens. The putter’s weighting gets the ball rolling well.

What bothered me slightly was the size of the putter in my bag. With the head cover on the putter it can completely cover up one of the 4 compartments in my bag, making it hard to use that compartment for any other clubs. A resolution would be a bag with the putter holder on the side.

I also found the “engineering” of the putter’s cover to be sub par. The two pictures here show that there are two flaps that fold over to close the cover. Obviously the flaps should go on either side of the shaft. But with this putter the smaller flap did not comfortably work on either side. You have to bend it around the shaft either way. My guess is they make one cover for many different models. Also, rather than using Velcro I would have used a magnetic seal. Velcro wears out after a while and starts to look shabby. I consider these to be “minor details.”

It has been a joy putting with the V-FOIL M5K-GT putter. MacGregor is making some great equipment and I highly recommend checking it out.