DiMarco sleeps on The Masters lead 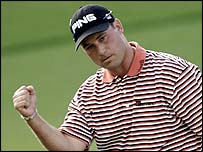 Chris DiMarco will wake up on Sunday with The Masters lead at -13. The only catch is he has 27 holes left to play. Today he posted his 2nd 67 in a row, and added another -3 for nine holes. No player has shot 4 rounds in the 60’s at The Masters. Will he be the first?

Tiger Woods turned his ship around and jumped back into the hunt by shooting a 66 for his 2nd round. He then kept the momentum going by firing a 31 on the first 9 of his 3rd round. Tiger leapfrogged all but one player ahead of him to end up in 2nd place at -9 after 2.5 rounds.

Thomas Bjorn is in 3rd place at -8 and the closest pursuers (Singh, Pampling and Hensby) are 4 strokes behind him. This could turn out to be a 3 horse race unless someone completes a low 3rd round.

Jack Nicklaus waved goodbye today from the 9th hole after missing the cut. He started his 2nd round from the 10th hole and therefore didn’t get that Hollywood finish he deserved on the 18th at Augusta. He says this was his last Masters and I believe him. Even at his age he does not believe in playing unless he can compete. He’s also not interested in being a ceremonial starter.