This post-Ryder Cup week and pre PGA Tour wrap-around (not reach around) week is one in which I have great interest. This is the week of the Alfred Dunhill Links Championship in Fife, Scotland. The event is contested on three of my favorite courses in the world, the Old Course in St. Andrews, Carnoustie Golf Links, and Kingsbarns. As I’ve played fair amount of golf on all three of these wonderful layouts, I’m doing a small post on each one with some photos so you can enjoy watching the event a little bit more. 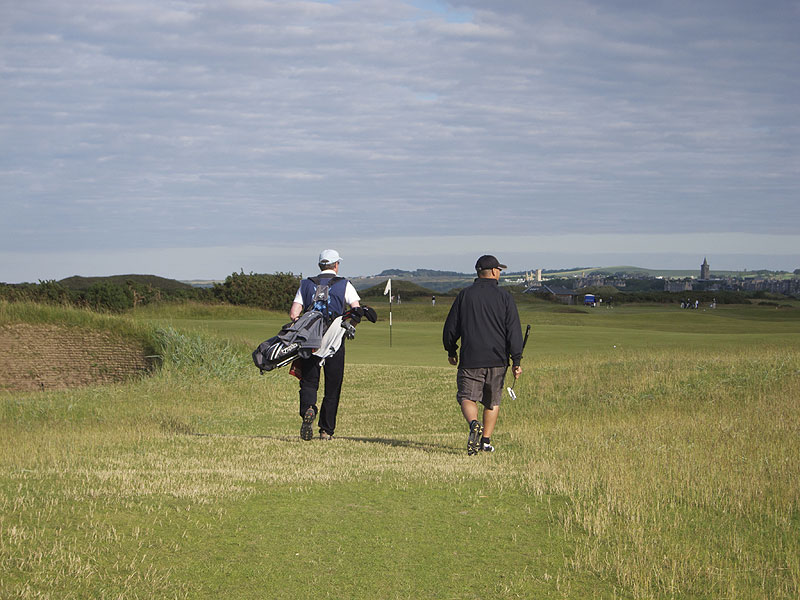 My good friend and caddie John Boyne of CaddieGolfTours.com (left) and myself at the Home of Golf – No better walk in the world than with John on on the bag and my putter in my hand on the par-3 8th at the Old Course.

The first course I’m going to feature must be the Home of Golf, the Old Course. The Old Course is quite old, an estimated 1,400 years old in fact. The Old is located in the town of St. Andrews, yards from lodging, restaurants, pubs, and next to the North Sea.

Playing the Old Course is quite an experience, one I’m happy to have had four times now. The course is not long by today’s standards, and the hard ground makes it play even shorter. With no wind, modern tour pros will score some very low numbers on the Old. If the wind kicks up though, watch out.

Some of my favorite holes on the Old include #2, a par-4 with a blind tee shot. If one were playing that hole for the first time and without a caddie, that player would have no clue where to hit the tee shot. The green on #2 is amazing. There is a huge hump in front of the green and approach shots must go over that hump and down onto the putting surface. The right side of the green has a huge hump which literally looks like a Volkswagen Beetle was buried there.

The par-3 11th hole is a “bugger” as they say in Scotland. The best I’ve managed on that hole in four attempts is bogey. The tee shot is very difficult as winds are often shoving the ball hard left to right. The green slants back to front severely and bunkers guard the front, making chip shots tough.

My favorite hole at the Old is the Road Hole, the tough par-4 17th. This is the most famous single golf hole on the planet. The Road Hole is where I scored by far the greatest par I’ll ever have. I know I’ll NEVER top it in my lifetime. I went out of bounds on my tee shot, hitting the Old Course Hotel observatory. After re-teeing and ending up in the left rough, I holed out a hybrid from 196 yards for par. 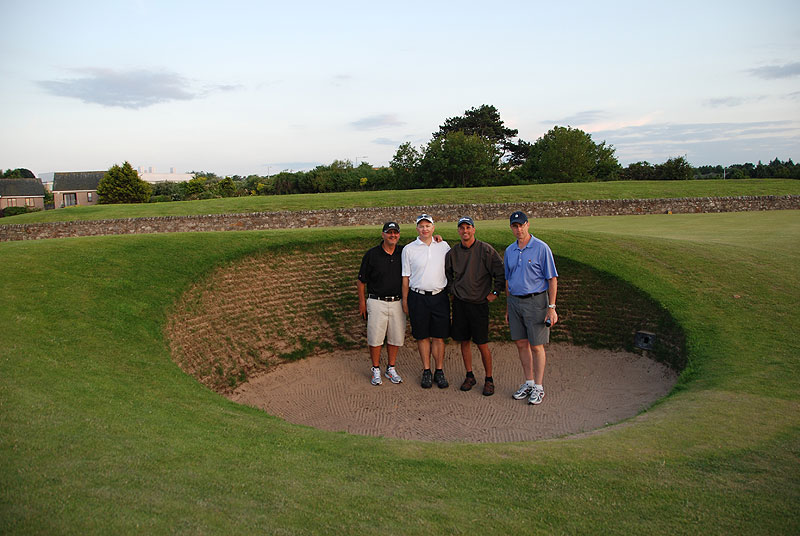 My great golf friends all bunkered in the Road Hole bunker!

The 17th is also the location of one of my worst single hole scores, when I could not get out of waist deep rough left of the fairway.

Pulling my amazing hole-out par ball from the hole on the 17th Road Hole. FORE!

The 18th at the Old is the hole I have the best record on. In four rounds I’m -2 lifetime. Two pars and two birdies. Many modern pros can drive the green on this short par-4. Upon further reflection, I’ve played this hole more than four times. There are a couple of “midnight” rounds on this hole where the only two clubs in the bag were a putter and a 5th of scotch. My best score on the 18th when using only a putter? Bogey. Brilliant.

Playing the Old Course is a unique experience in golf. There is NO course like it with its shared greens, holes which crisscross each other, and of course the amazing terrain. It is truly a special experience, and one which is best experienced with a local Old Course caddie on the bag.

The new “Old Pavilion” is open at the Old Course in St. Andrews.

“The Old Pavilion will give room for the golfer to wait in comfort, use the toilets and be offered light refreshments.”

After over 1400 years, there’s finally somewhere a golfer can go to use the bathroom when waiting for a tee time on the Old Course!  For those who have yet to enjoy the experience of “gowf” at the Old Course, the only facilities nearby could be found inside of clubs and pubs like the Dunvegan.  And going in the Dunvegan meant consuming a “wee pint,” which then created the need to use the facilities.  Sort of a vicious cycle…

Can’t wait to experience the new Old Pavilion and see the new Caddie Pavilion as well, when I return in the summer of 2015.

Check out the St. Andrews Links Trust Blog (one of my top reads) for more on the Old Pavilion and the Caddie Pavilion.

Fact: Women Can and DO Play the Old Course in St. Andrews

There is a lot of discussion and misinformation going around regarding the news that the Royal and Ancient Golf Club of St. Andrews is considering allowing women into their club for the first time in the club’s 260 year existence.  Many people are up in arms, complaining about the fact that women can’t play the Old Course.  Quite simply, those people don’t have their facts straight.  Here are some clarifications:

Formed in 2004 and based in St Andrews, The R&A seeks to engage in and support activities that are undertaken for the benefit of the game of golf and, despite deriving its name from the members’ club, is separate and distinct from The Royal and Ancient Golf Club of St Andrews.

The R&A organises The Open Championship, golf’s oldest Major, along with a number of other amateur and junior events, some of which are sanctioned by other golfing bodies. In addition, The R&A assumes responsibility for the administration of the Rules of Golf with the consent of 143 organisations from the amateur and professional game, and on behalf of over 30 million golfers in 126 countries throughout Europe, Africa, Asia-Pacific and the Americas.

The Royal and Ancient Golf Club of St Andrews

A major reorganisation in 2004, however, saw the Club devolve responsibility for these functions [the Rules, The Open and golf development] to a newly-formed group of companies, known as The R&A.

The Royal and Ancient Golf Club of St Andrews was founded on 14 May 1754 with the first Challenge for the Silver Club. Evolving over 250 colourful years of British history, it has grown from a small society of no fixed abode into a club whose membership of around 2,500 extends worldwide.

From the late 19th century, the Club increasingly came to be regarded as a governing authority, both in the United Kingdom and abroad. Between 1897 and 2003 it developed three distinct areas of responsibility, namely the administration of the Rules of Golf in conjunction with the USGA, the running of The Open Championship and other key golfing events, and the development of the game in existing and emerging golfing nations.

A major reorganisation in 2004, however, saw the Club devolve responsibility for these functions to a newly-formed group of companies, known as The R&A.

Today, the Club has four objectives:

St Andrews Links Trust is a charitable organisation (Scottish charity number SC006161) responsible for the management and maintenance of the Links courses at St Andrews, including the famous Old Course, host of the 2010 Open Championship. The Trust was established in 1974. It employs more than 300 permanent staff and seasonal workers during the high season.

The Old Course is at the heart of the Links but it is part of a family of six public courses, three of which are well over 100 years old. Around 200,000 rounds of golf a year are played on the Links with its three championship courses, the Old, the New and the Jubilee, two 18 hole courses, the Eden and the Strathtyrum, and the nine-hole Balgove Course.

The Trust manages a number of additional facilities including the Links, Eden and Castle Course clubhouses, the Golf Practice Centre and Golf Academy and five shops. Any revenues generated go back into the running of the historic courses.

A seventh course, The Castle Course, opened for play in 2008 on a site to the south-east of St Andrews and has already won several international awards. It was named alongside the Old, New and Jubilee courses in the prestigious Golf Digest Top 100 Courses ranking in its first year.

There it is in black and white.  Those who are mad because women cannot play the Old Course can calm down.  Step away from your social networks and non-fact-checked articles and relax.

I love to keep close tabs on the “Auld Grey Toon” of St. Andrews.  It is my home away from home, even though I’ve only been there twice…

Good friend and Old Course caddie John Boyne tipped me off about a very neat and historic golf discovery by Roger McStravick.  Mr. McStravick has been researching in the University of St. Andrews for an upcoming book, “St. Andrews, In the Footsteps of Old Tom Morris.”

The discovery was found through the reading of manuscripts from the Golf Collection in the University of St. Andrews Special Collections Department.  In statements written by Old Tom Morris was information pertaining to Tom’s building of his first golf shop next to the 18th green of the Old Course in 1878.

I hope to get in touch with Mr. McStravick and do a small interview about this discovery, and also pick his brain for other great information about Old Tom, the Old Course, and the Old Gray Town.   Stay tuned.

For more information check out this article in Golf Business News.

I was so excited to write this review about Kingsbarns Golf Links, a modern links course located seven miles southeast of St. Andrews, Scotland.  When I started though, I ran into a mental brick wall.  The mental block was simply due to the massive amount of information, photos and thoughts I have on this brilliant course.  I didn’t know where to start.  So much to say.  Words can’t adequately convey how great the golf experience at Kingsbarns is.  That being said, I’ll take my best shot. 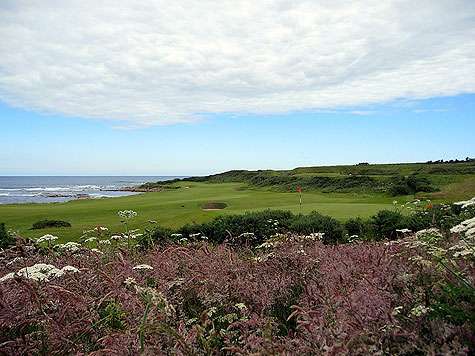 As I mentioned, Kingsbarns is about seven miles southeast of the “Auld Grey Toon” (old gray town) of St. Andrews, Scotland.  The road from St. Andrews to Kingsbarns is tight, windy and scenic, in typical Scottish fashion.  Driving on such roads can be a “wee bit” frightening for an American, as the cars are driven on the “wrong side” of the road.  Of course anyone from the UK would say that us Americans drive on the wrong side…

Kingsbarns sits on the coast of the North Sea, many of the holes featuring fantastic views.  There is a two mile stretch of the course comprised of six holes, which are entirely on the shoreline.  Several times during my round with my good friends this past summer at Kingsbarns, we looked around at the holes adjacent to the North Sea saying, “Pebble who?” END_OF_DOCUMENT_TOKEN_TO_BE_REPLACED