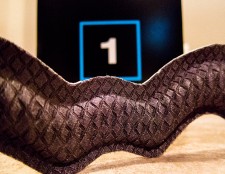 Back on December 11, 2013 I received an interesting box from FootJoy. Inside was a strange, flexible, soft object with a odd shape, somewhat like a bat. This mystery item was a small part of a new shoe which would not be released to the public until mid January.

On December 20th another box arrived with a somewhat oval shaped item, mystery #2. It had a cool texture and a soft yet strong rubber frame.

On December 26th a more obvious item arrived, the sole of a new golf shoe. I can’t imagine how many CAD and research & development hours were spent on the sole alone. It was obvious at this point that these new FJ shoes would have some serious traction. The featured material in the sole, “NitroThin TUP thermoplastic urethane.” That was going to be my first guess. 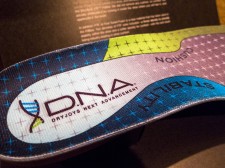 On January 7th (this is getting fun) a new mystery box contained the “Xtra-Thick FTF FitBed.” In plain english, the bed of this new golf shoe. FTF is short for Fine Tuned Foam. On this day I learned that FootJoy has led the shoe count on the PGA Tour since they started counting shoes in 1945. I also learned that the PGA Tour started counting shoes in… 1945.

The last and final box was no mystery. Inside was a pair of stunning FootJoy D.N.A. golf shoes. Since a picture is worth 1000 words, here are 1000 words below.

There’s one problem with receiving a stunning pair of golf shoes on January 15th in northern Utah. That problem is snow. Courses can be closed here anytime ranging from late October to earlyk April depending on how heavy a winter it has been. As much as I wanted to get on my FootJoy D.N.A. review right away. It would take a trip south to get the first rounds in.

Fast forward nearly two months later and the snow has melted. I’ve had the chance to put in a sufficient number of rounds to formulate my conclusions about the FootJoy D.N.A. golf shoes. Lets do it.

From the ground up…

The NitroThin TPU outsole provides a great amount of traction. The platform is not too stiff, which is a big deal. The model I tested has real spikes, real traction thanks to the outsole design.

Next is the “Nitro Last” full rounded toe. Not all golf shoe makers can pull this toe design off. FootJoy does it magnificently.

Some cheap and poorly designed golf shoes do not provide enough arch support, or improper support which could even be worse. The Xtra-Thick FTF FitBed supports the foot perfectly.
The real “ChromoSkin” leather upper of the shoe is beautiful as you should see in the photos I’ve shot. The leather is soft but durable. It comes with a two year waterproof protection.

The “SnugFit” tongue with “MicroVent” technology molds to the foot and helps the foot breathe. I sweat most from the knees down, so breathability down there is a big deal.

The 3D FoamCollar (ahem), also mystery item #1, molds to the ankle for comfort and fit. This particular piece, along with the tongue, have a very soft and silky surface.

If by now the photos haven’t translated the fantastic looks and style of this shoe, go back and look at them again and pay attention this time!

Seriously, these are very sharp and classy golf shoes.

The most important part of a golf shoe is the performance in my opinion. All the sharp looks and technology don’t mean a thing if the player is not supported with a solid base which includes great traction from the sole and no movement from the foot inside. The traction and performance of the D.N.A.’s is as good as any shoe I’ve tested.

I have put the D.N.A. shoes into play in countless situations, from dry desert sand to muddy courses still partly covered in snow. In all temperatures, ground conditions, and environments, the shoes perform fantastically.

The FootJoy M:Project golf shoes I reviewed last year were possibly the most comfortable golf shoe I’ve ever worn right out of the box. No break-in period.

I can’t say the same about my D.N.A. shoes. The first couple of rounds caused some irritation in my right foot on top of the right three toes. There was a bit of soreness there.

That bit of friction disappeared as the shoes broke in, so no worries at this point.

The FootJoy D.N.A. model is available in sizes ranging from 7-15, depending on shoe width. There are seven colors available, the primary color scheme being the sole of the shoe though a couple of the uppers come in different colors than white. 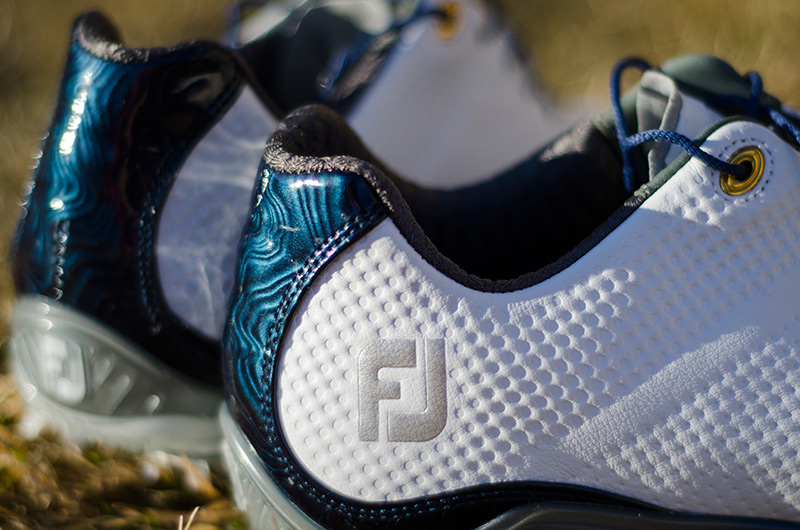 The process of seeing all the elements which go into a golf shoe before it is assembled was quite educational and very fun to participate in. There is much more R&D in golf shoes than most people realize I’m sure. That R&D and FootJoy’s dedication to quality, performance, and traditional style, comes together to produce a fantastic golf shoe.

For the last several weeks I’ve been a part of a select group of people who have been receiving weekly “mystery” boxes from FootJoy. Inside those boxes have been clues to a new product and new technologies within that product, the new FootJoy DNA golf shoe.

I did my best with these photos to try and capture just how sharp and classy looking these golf shoes are. When I took them out of the box the wife and I both let out a little oooooohhhhh.

As soon as the snow melts, or when I go nuts due to the snow and decide to go south to play some golf, I’ll be slapping these babies on my feet and beginning the rigorous testing I put golf shoes through for my reviews.

Stay tuned. Until then enjoy the photos in the HOG FootJoy DNA photo album.

Remember back in the old MASH TV series how Radar O’Riley was shipping a jeep home, one part at a time?  I’m doing something similar, putting together FootJoy golf shoes one part at a time.  Each of the last four weeks a “mystery box” has arrived containing one small part of a new breakthrough shoe.  Come to think of it, I’m assembling one shoe…  Oh well. 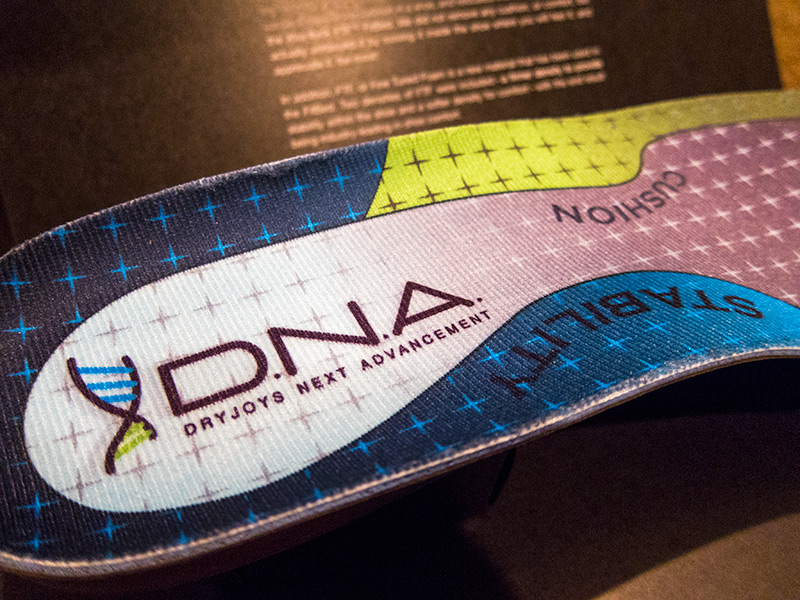 This week’s mystery box contained an “Xtra-Thick FTF FitBed,” pictured above.  Yes that was going to be my guess for the name.

“FTF” is short for Fine Tuned Foam.  This foam makes up the cushion bed inside the shoe.  The bed provides stability but is still soft and comfortable.

Thanks to FJ for this trivia.  FootJoy has been the most worn show on the PGA Tour since shoe counts were first taken in 1945.

Even more entertaining is that I now know that shoe counts on the PGA Tour began in 1945.

This is fun.  FootJoy has been sending weekly “mystery boxes” which contain very interesting clues to a new technological innovation.  It’s quite obvious at this point, if it was not already, that this innovation is in the world of golf shoes. 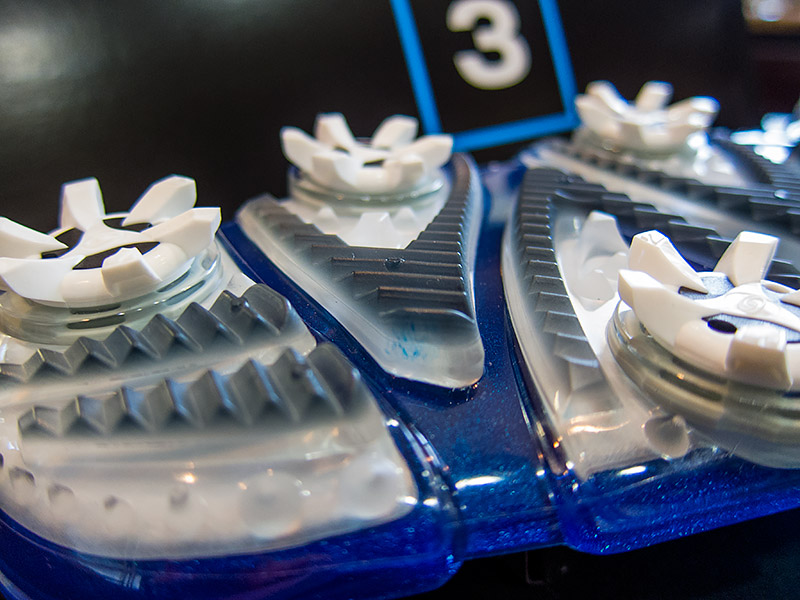 Today’s more obvious mystery item is the sole of a new golf shoe which features a “NitroThin TPU Outsole.”   That was going to be my first guess.

This thermoplastic urethane outsole has been in development for several years.

Below my son Seve is helping me with the analysis of this NitroThin TUP thermoplastic urethane outsole.

Master Seve wisely pointed out that urethane is also the same material found in the covers of premium “tour” caliber golf balls like the Titleist ProV1.

Clue #2 with regards the “new FootJoy innovation” arrived at my door this morning. This is box number two of five.  Inside was an interesting object, made from a couple of different materials. 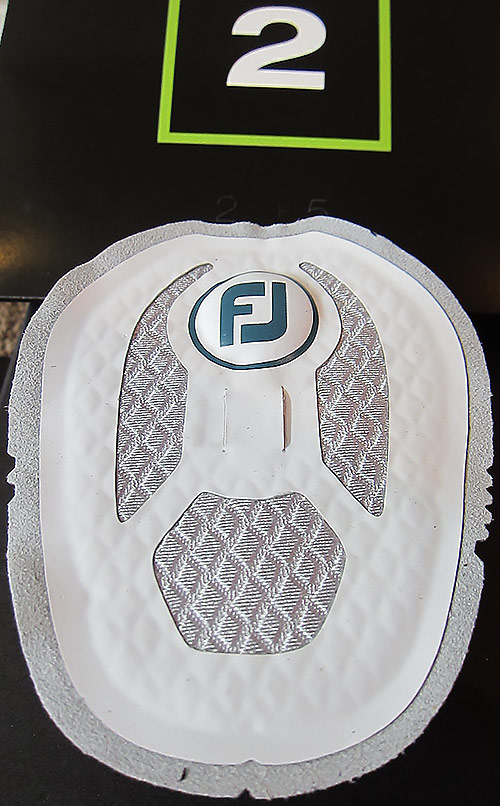